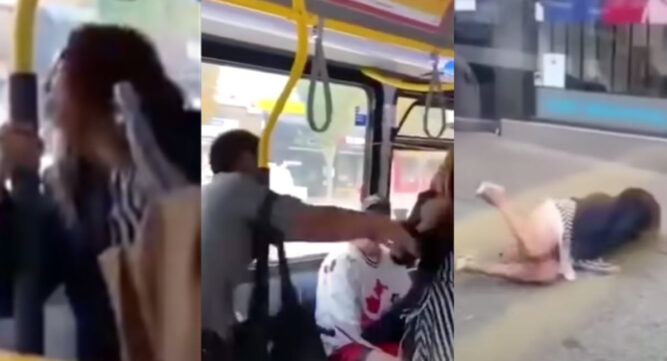 Recently, someone uploaded a troubling video onto TikTok, showing a woman without a mask traveling on a public bus in Vancouver, Canada. In the video, the woman was pushed off the bus after she spits on a male passenger. In the 30-second video (which has since been deleted), we see a woman who had reportedly been engaged in a heated argument with a seated male passenger. In the background, we hear someone say “disgusting,” perhaps referencing the fact the woman purposely refused to wear a face mask. Suddenly, we see the woman turn around and spit on the seated male passenger, who gets up out of his seat and shoves the woman toward the door before pushing her a final time off the bus face-first onto the street.

We then hear a female passenger say, “oh my God, what is wrong with you?” Another passenger is seen getting off the bus to attend to the woman while the man who pushed her says, “she spit on me,” as he wipes the woman’s spit off his forehead, according to the Independent. The video soon came to the local transit police’s attention, who dispatched officers to gather witness statements. Translink, the company in charge of Vancouver’s public transportation, also released a statement saying:

“The safety of our customers is our #1 priority. Thank you to everyone for their concern. Transit Police are currently investigating this matter.”

Video shows masked man pushing a woman off a bus after she spat on him https://t.co/kVxEFjEY95 Altercation could have been avoided if she had been refused service. She was bold enough to ride without a mask and spit like she was in a baseball dugout. #cdnpoli #bcpoli

“It’s gone over to our external investigation unit, they are attempting to reach out to the individual who had posted the video in an effort to gather additional information.”

While addressing the deletion of the video along with the difficulty of reaching anyone at TikTok’s corporate office, Sargent Hampton added:

“This makes the investigation difficult, we are working off of a video with very limited information. We know when the video was posted but we don’t know when it was taken. Was this taken yesterday or was it taken three months ago? We are asking if anybody was a witness to this even or was involved in this event to please contact transit police.” Sgt. Hampton added, “It’s disgusting. No other way to put it, for people to be spat on is disgusting for people.”

Right now, no one knows exactly how the dispute started or what it was really about. However, many believe it was probably something to do with the woman not wearing a mask. Meanwhile, TransLink continues to urge all commuters to wear masks while riding their buses. As for the woman in the video, she could likely be facing legal consequences if identified.

“If there is somebody on transit who is not wearing a mask, we encourage people to socially distance themselves from that person,” Sgt. Clint Hampton added. “We don’t want people trying to police the mandatory mask policy and putting themselves at risk.”

Michael Merrill shares video on Facebook of a man telling a woman she’s “disgusting” for not wearing mask on bus, she spits on the man, and she punches her, and then shoves her off the bus, making her fall onto the pavement [VIDEO] https://t.co/jcFeItppcM

Do you feel the man in the video overreacted or reacted appropriately? You can watch the entire video below.