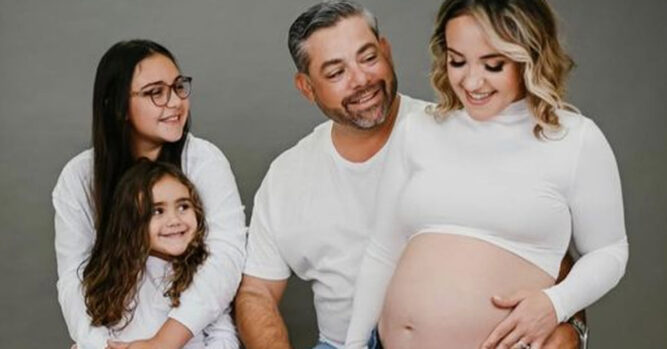 If you had to choose something that you would never want to go through in life, what would it be? I’m sure that all of us could think of something that we would want to avoid.

Perhaps at the lead of the list if you really stop to think about it, however, is losing someone that is very close to you. We often experience it when we lose our parents and sometimes, we may lose a close friend or another relative.

For a woman named Grace Sotolongo-Alvarez, the loss came at the worst time in her life. You see, her husband, Gabriel, died as a result of a construction accident when Grace was 39 weeks pregnant.

Grace and Gabriel had been looking forward to the birth of their child for a long time. They were already parents to a five-year-old daughter and Gabe had a child from a different marriage, and she is 12 years old.

They did what they could to keep their family together and, although they experienced their own ups and downs, it seemed as if life was working out well for them.

Unfortunately, Gabe was injured in a construction accident on October 25 and he lost his life. One week later, his wife gave birth to their baby and she named him Gabriel Tomas Alvarez.

There were many things that happened during that difficult time that made things just a little worse. For example, the baby was born at 1:05 PM, which is the same time that her husband died a week before.

Gabe and Grace had been married since 2015 and they were doing quite well as a couple. When she received the phone call that her husband had died on the scene of a construction accident, it was devastating. Both he and a colleague fell victim to heavy equipment falling on them.

“When we got pregnant with Gracie, before we knew she was a girl, we went to buybuy baby and walked around and found a the mock up of a nursery that was decorated with the Lion King and we agreed if Gracie was a boy that would be the theme,” she said. “I took a stupid picture of you and we moved on. Of course she wasn’t and my favorite Disney movie, The Little Mermaid, won for nursery decor.

“A few years ago I surprised you with tickets to see the Lion King off Broadway and you were as happy as a little kid going to see Disney on Ice,” she continued. “Two weeks ago I surprised you with this shirt for you and onsie for our son, our little Simba, and you beamed. We laughed at how we would take the pic of you wearing the shirt by the hospital window holding him up for the world to see.”

“These photos were supposed to be so different,” she admitted. “Every time I walk out of the room to another area of the hospital for the baby to be checked, I get the urge to take a pic so I can text you and update you at work and you can text me ‘awesome’. I think forever I will feel the urge to text you because forever you will be at work, and we will see each other at home. I miss you. I need you. I love you but rest assure that I got this.”

Grace also had a picture of Gabe in scrubs for the arrival of Gabriel. She wanted to wake up and see his face that has always been by her side. In her words: “He would’ve been there if he hadn’t been taken from us, so I had to make sure I could ‘see him.'”

“I know he’s been with me the entire time,” Grace noted. “Gabriel looks just like him. I will make sure he knows what an incredible husband, father, brother, son and friend he was, and I will do my best to raise him in the manner Gabe would have wanted.”

Although she is going through some challenging times, she is doing her best to step up to the plate and take care of those who are her own. She looks at him as being an incredible father and a person that would do anything for anyone.