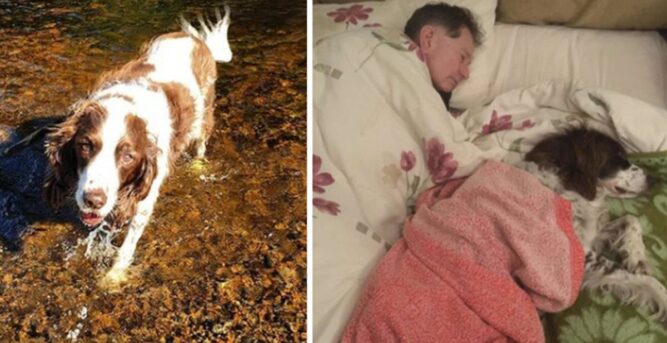 For many of us who love animals, our beloved pets are cherished members of our families. The hardest thing to do when you love an animal is to have them put to sleep if that time ever comes. I believe that people who care for senior animals have a special spot in heaven. It’s so easy to just have them put down when they become old and can’t walk well or climb stairs, but people who are in it for the long haul and don’t turn their backs on their pets are the real heroes. When an English springer spaniel named Spike was adopted by Catherine Morris’ family nine years ago, the whole family fell in love.

They made the decision that Spike would be a dog who lived downstairs, but Spike wasn’t having it. Catherine says that the very first night he was with the family, they closed the gate to the stairs and went to bed. Spike whined for a few minutes, then promptly jumped over the gate in the dark and made his way to her parents’ room, where he hopped straight up onto their bed. From then on, that’s exactly where he slept. This good boy wasn’t about to sleep downstairs alone, no way. In the daytime, Spike was full of tons of energy, running around chasing his tennis ball for hours on end.

Spike loves to snuggle and even loves getting underneath the covers so he can get as close to his humans as possible. However, he’s 14 now and the years have taken their toll on him. He has suffered two strokes, but he’s still rocking along. For several days after his second stroke, Spike couldn’t stand up, so the family had to carry him around the house. However, he was tenacious, and he got better and started teaching himself how to walk again.

As tenacious as he is, Spike can’t make it up and down the stairs, so the family blocked off the bedroom so that he wouldn’t hurt himself trying to get there. They came up with a plan to make their beloved canine family member happy. They set up the stair gate again and now they take turns sleeping on the couch with him every night. Dad takes extra special care of Spike to make sure he’s good and comfy at night.

Dad even brings Spike his food and water to the couch and feeds him by hand to make sure he keeps his strength up and takes all of his medications.