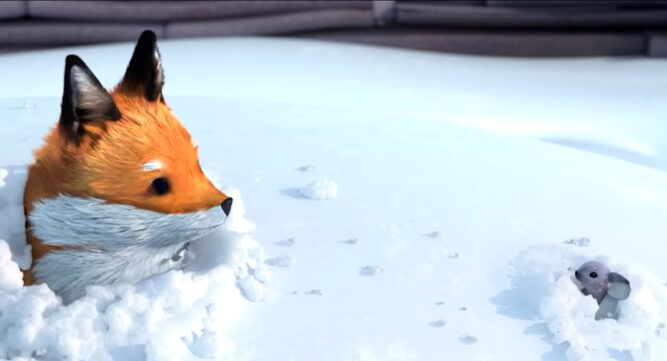 While we are more accustomed to large sprawling animated CGI films like “Frozen” and “Shrek,” there is something to be said for short films with simple storylines that pack powerful messages. One such film is 2015’s “The Short Story of a Fox and a Mouse,” produced by the ESMA team. In the film, we follow a fox searching for food while in a snowy field during winter. When the fox spots a mouse, he begins to chase the rodent. Eventually, the mouse finds itself chased up a tree occupied by two owls. At first, the mouse pretends to be an owl, adopting their sleeping posture. However, the fox is wise to his game and soon wakes up the owls, who also become interested in catching the mouse.

What follows is a whimsical chase involving the two owls and the fox in pursuit of the mouse. However, the story takes an interesting turn after both the fox and mouse find themselves in a dangerous life or death situation. As far as the animation, the characters blend realism with cartoonish features quite well. The environment does a good job of mimicking real-world conditions such as shadows, and the manipulation of the snow  (right down to the footprints) is very well done.

Now, the owls are slightly less realistic than the other characters and have more of a cartoonish Laurel and Hardy feel to them.

The classical music, along with nature sounds, does a great job of keeping pace with the action, building dramatic effect where needed.

What really shines is the creatures’ natural movement; my favorite was watching the fox crouch and wiggle his hindquarters before leaping into the snow.

All in all, this was a very well-produced, beautiful, short animated film with incredible visual effects along with a lighthearted storyline; you can watch this charming little film in the video below.