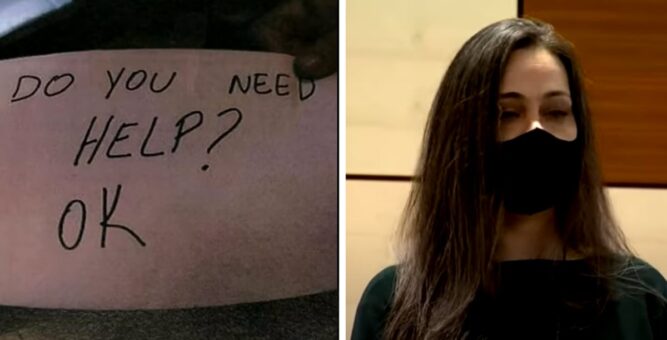 We see far too many stories about abused children who don’t get the help they need in time. The fact is, in most cases, there were warning signs that people could have picked up on, but sometimes good-intentioned people are powerless, and in some cases, may be afraid to get involved. However, that didn’t stop one Florida waitress who saw something terribly wrong going on at one of her tables one evening. A family was eating at an Orlando Mrs. Potato restaurant when Flavaine Carvalho noticed that one little boy at the table wasn’t allowed to order food. The rest of the family was eating but the little boy wasn’t.

She later learned that the little boy was 11 years old, but that New Year’s Day, she just knew he was a little boy in pain. She went up to the table and asked if something was wrong with the family’s food, and the stepfather told her that the little boy would be eating at home later. It was then that Flavaine noticed that the little boy had bruises all over his arms and even on his face. She said that she could see a huge scratch right between his eyebrows. Then, from another angle, she saw a bruise on the side of his eye, she said in an interview with Fox 35. Instinctively, she knew something was terribly wrong.

Chief Orlando Rolon, @OrlandoPolice, with waitress Flavaine Carvalho (middle) who saved an abused 11yo when he was dining with his family. They say the boy was “tortured.” The full details of his salvation on @fox35orlando at 5/6pm. #FOX35 #news #crime #update pic.twitter.com/g4jlzXonal

She couldn’t just sit there and do nothing, she said. She said that she just couldn’t let him leave without trying to help him. What she did next was astonishing. She wrote on a large piece of paper “Do you need help?” and stood behind the parents so that they couldn’t see the note. When the little boy looked up and saw it, he nodded. That’s all Flavaine needed to know. She immediately called the police. On the 9-1-1 call, she said that she was concerned and didn’t know what to do. When the police arrived, they interviewed the little boy, who said that he was being abused by his stepfather.

👏🏼👏🏼♥️ RT @MikeSington: FOLLOW UP: Here’s the sign the waitress made, and a photo of her. Her name is Flavaine Carvalho. The boy was 11-years-old. pic.twitter.com/xYEmWRD8Ae

He shared that he had been denied food as punishment and that he had been hung from a door, tied up, and handcuffed as he was hit with a broom. He was about 20 pounds underweight and had bruises all over his body. The police arrested the stepfather and charged him with three counts of child neglect and aggravated child abuse. The mother has also been charged with child neglect because she confessed to knowing about the abuse and not seeking medical attention. The boy was removed from the home along with a four-year-old child.

Flavaine is being called a hero for her actions, and rightly so. A representative from the Orlando Police Department said that if she had not acted, the little boy would probably not have survived. Watch the news story about this incident below.

Here’s a longer video about this story.