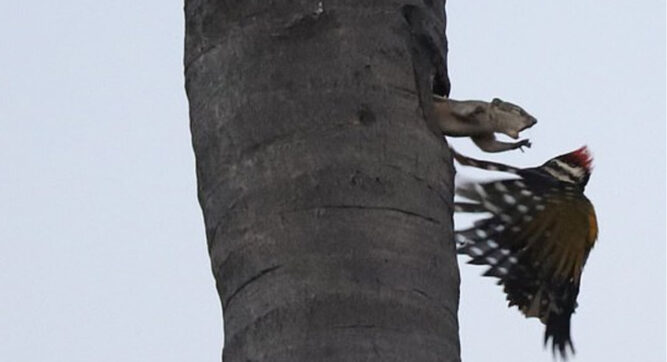 Many of us have had the unpleasant experience of being woken up found a sound slumber by an inconsiderate person. One of the worst is when people call when you’re getting into that warm and fuzzy feeling just before you plunge into dreamland. It’s a feeling most of us might not notice until it’s rudely interrupted. And being woken up is bad enough, but what makes it even worse is when it’s for a dumb reason, like a telemarketer trying to sell you a timeshare vacation or something. Well, believe it or not, humans are not the only creatures to experience these strangle-inducing sleep interruptions. Recently a photographer captured a hilarious exchange between a grumpy squirrel reading the riot act to a noisy woodpecker.

While the rodent was attempting to get some beauty sleep, the woodpecker began jackhammering its beak on the same tree containing his cozy nest. The next thing you know, the Indian palm squirrel lunges out of a hole with its cute little face pinched in adorable rage and mouth wide open as if yelling at the top of his lungs. In another photo, we see the woodpecker appearing to fall back as if in shock. There’s also a photo that shows the squirrel appearing to have its tiny claws reaching for the bird.

The crazy encounter happened last month in Coimbatore, a city located in the southern Indian state of Tamil Nadu.

The scene was captured by Ravi Raj, who first heard the woodpecker doing its thing 25 feet up a tree.

He was on his way home from a bakery when he just so happened to witness the squirrel delivering its wrath.

The woodpecker was most likely a common flameback, found throughout the subcontinent.

It’s likely the bird was pecking for insects and happened upon the squirrel’s home.

Thankfully, the woodpecker flew off; a little rattled but otherwise fine.

As for the squirrel, we can only hope the poor little guy resumed his nap in peace.