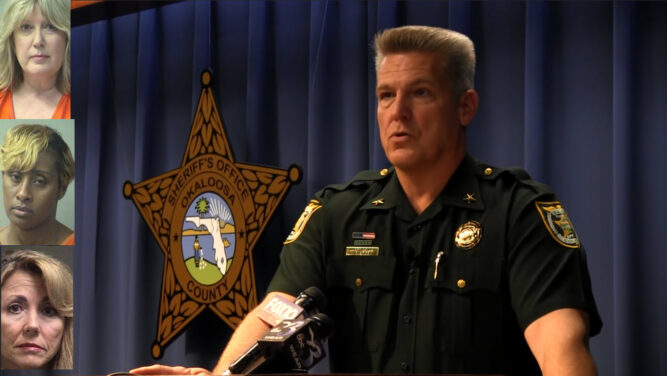 Warning: The following story contains descriptions of child abuse and the abuse of children with special needs. Reader discretion is advised.

Three teachers in Florida face felony charges after the women allegedly locked up terrified autistic students in a dark closet while torturing their students with loud whistles. Teacher aides Carolyn Madison and Diana LaCroix, along with teacher Margaret Walters, were arrested on charges related to the abuse of autistic students. All three suspects worked for the Silver Sands School in Fort Walton Beach and are now facing felony charges of first-degree aggravated child abuse. For parents with children attending Silver Sands, the news came as a shock, especially for the parents of students said to have been abused by the teachers.

For parents of students with special needs, trust is crucial, and they trusted staff members at the school to educate and look after their kids in a safe environment. The incident came to light after a teacher’s aide became disturbed after witnessing the three women torturing the students. She later contacted the Okaloosa Sheriff’s office to file a report, which started an investigation. Eventually, the investigation yielded enough evidence to lead to their arrests. The school is a part of the Okaloosa County School District and provides an education program tailored for students with Autism.

The teachers had many options for dealing with unruly students, such as contacting the principal, the school’s safety team, or even their parents.

According to reports, Wolthers, along with the two aides, would force students into her classroom’s restroom, then turn off the lights, making the space pitch black before closing the door and locking it.

This is gross but no surprising. My niece who is special needs would be taunted & treated poorly when she attended Miami-Dade P.S. & was not making progress. My sister made a tough decision & gave me custody of her & sent her to live w/me in GA. Wow a totally different kid!

A witness says the kids would “scream and cry” begging to be let out, and if they tried to open the door or turn on the lights, the teachers would leave them inside the darkened room for even longer.

There was also an incident where the teachers allegedly tortured a sound-sensitive student by blowing a loud whistle directly into his ear. The women were said to have done this while they pinned his hands so he couldn’t cover his ears. The arrest report states:

The three women were also said to have threatened the same child with the loud whistle on several occasions to “correct his behavior.” The suspects face severe penalties as the felony charges carry a maximum prison sentence of 30 years along with a fine up to $10,000.

As someone on the spectrum with a hypersensitivity to sound, I can tell you that this would be legitimately torture and would be a first class ticket to setting off more meltdowns not less. Neurotypical folks have NO IDEA how horrific this really is.

For more on this story, you also watch a press conference held by the sheriff’s department below.