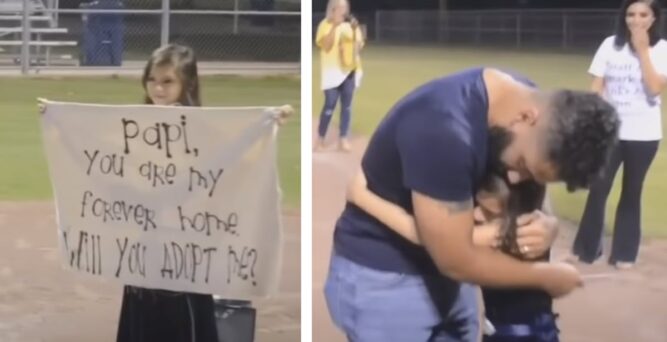 Leonardo Avila says that the bond he shares with his eight-year-old stepdaughter Alessandra is “stronger than steel” and he describes the two of them as being “peanut butter and jelly.” Alessandra first came into Leonardo’s life when she was only about eight months old, but her mom, Angela, said that something clicked between the soon-to-be stepfather and the baby. They were inseparable from day one. For his part, Leonardo says that the very first time he held the little girl, it was comfortable to him and it “just came natural.” In his eyes, Alessandra belonged in his arms all along.

Maybe it’s because of their natural bond that people are surprised when they learn that the two aren’t biologically related. Angela says that when they moved to North Carolina to be with Leonardo, he didn’t hesitate for a minute to become the little girl’s daddy. When Alessandra asked her mom if they could make it official and “Papi” could adopt her, Angela was taken aback. It’s not a small decision, after all, but Alessandro knew what her heart wanted, so they planned a super special surprise for Leonardo. What they did was plan it to take place on a baseball field. When Leonardo was scheduled to look at home plate at Veteran’s Park, they made their move.

Leonardo was led onto the field and when he looked back, he saw his little girl holding a sign that said, “Papi, you are my forever home, will you adopt me?” The big guy said that it brought tears to his eyes and was “completely unexpected.” He admitted to being completely surprised by the adoption proposal. Without hesitating, he answered a very happy “yes!”. Alessandra said that she could see how happy he was and that he was crying tears of joy and love.

When the video was shared on Facebook, it went completely viral. To date, it has been viewed more than 2.4 million times, has more than 2,000 comments, and 162K reactions. Watch this touching video below.