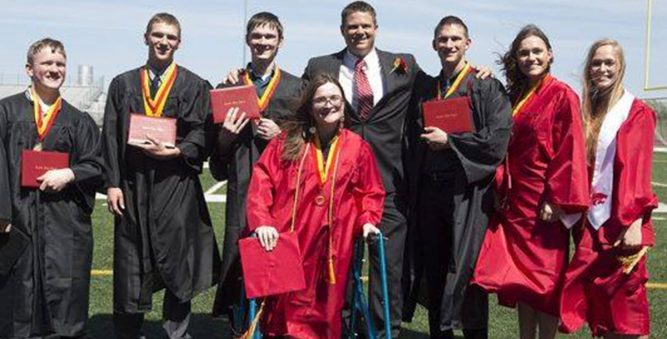 It was 1997 when Kenny and Bobbi McCaughey made history in Iowa. They didn’t set out to make history. They just wanted what most young couples wanted, to start a family. What they ended up doing was having seven babies at once, and these babies were the first surviving septuplets in the world. The world met these kids when they appeared on the Oprah Winfrey Show to celebrate their first birthday. Each kid received their own birthday cake. They also got to meet U.S. Pres. Bill Clinton. Their names are Kenny Jr., Alexis, Natalie, Kelsey, Nathan, Brandon, and Joel and they joined one sister who is older than them.

The septuplets were born nine weeks prematurely and attracted headlines from all around the world. Think about the logistics of having seven babies, and all that it involves. The babies required an average of 52 diapers and 42 bottles of milk every single day. This was before the days of GoFundMe, so the couple didn’t receive as much help as they might these days, but they did get some donations. One thing they got was a 5,500 square foot home, a van, and a year’s worth of Kraft’s macaroni and cheese. Additionally, they got diapers for two years and most importantly, full college scholarships to any Iowa state university.

The family relied on a garden to feed their growing brood, so they had tons of good home-grown vegetables. Two of the kids were diagnosed with cerebral palsy and had to use walkers, and in 2005, Nathan underwent back surgery to improve his walking. Now he no longer has to use a walker. All of the septuplets graduated from high school and went to college, and Brandon enlisted in the U.S. Army. Growing up, the kids were always together, and the kids who graduated from college this spring say that going to college gave them their first taste of independence.

Now, they’re not just the seven septuplets, Kelsey said. Going their own paths in life allowed them to become their own people and explore their own different talents. They can now dive into life as individuals. Watch this video of their journey below.