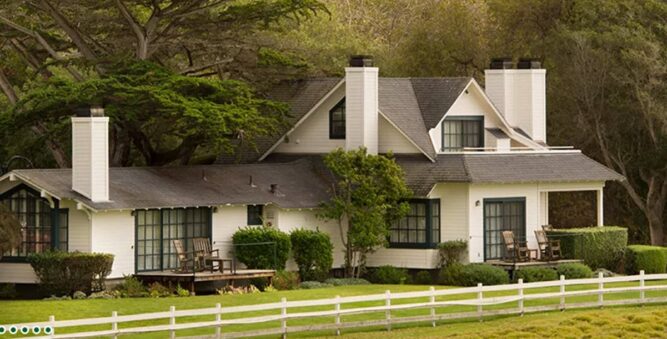 When Clint Eastwood first discovered the beautiful Mission Ranch in Carmel-by-the-Sea, California, he was a recruit at the military fort nearby, Fort Ord. He was just looking for a place to relax and enjoy a good cheap meal and a couple of sodas. I’ve been to Carmel and it’s certainly beautiful. The ocean and the cliffs with the mountains in the background are as gorgeous in person as they look in movies. Eastwood was instrumental in transforming the town of Carmel, and then he took on the task of transforming Mission Ranch. It was an expensive job and a lot of work, but he was up for it.

When he first discovered Mission Ranch, he wasn’t a hotshot movie star. He had been a lumberjack before being drafted into the military and seeing Carmel and the ranch was love at first sight. In an interview with Architectural Digest, Eastwood says that he sort of “adopted” Carmel, and who wouldn’t want to? The town is set above the lush wetlands where the river flows into the Pacific Ocean at Point Lobos on the ranch’s property. It has dramatic views of the beautiful sea and the rocky Monterey coastline. And I can attest that the gleaming curve of the beach is one of the most beautiful spots on the coast of northern California.

Forty years later, Eastwood is one of the most successful movie stars in the world and is also an award-winning director. He’s famous for starring in the Dirty Harry movies and won an Academy Award for his film “Unforgiven.” Eastwood’s first home was on the Monterey peninsula and it seemed natural for him to migrate there, he says. He also loves golfing and spends a fair amount of time at the Pebble Beach Golf Course. In fact, the first movie he ever directed was about a disc jockey from Carmel, “Play Misty for Me.” The flick was shot in Carmel and the scenery is beautiful.

At Mission Ranch, which sits on 22 acres, you can actually stay as a guest in one of the 31 hotel rooms that are located in the 10 buildings on the property. There is a restaurant and a popular piano bar as well.

In the video below, you can see Eastwood kicking off the Carmel Centennial Celebration.