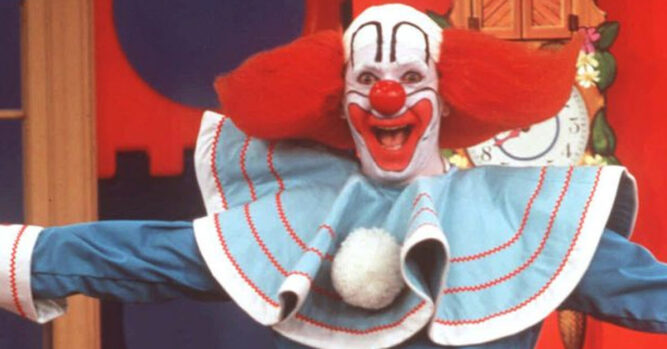 I think that most of us have an opinion about clowns, with some of us loving them and laughing when we see them and others running in fear at the thought of having one look in your direction. Although that may be true, there are certain clowns in our lives that we know, whether we love them or not. Perhaps one of the clowns that we think of more than any other is Bozo, as he would be one of the most beloved clowns in our history. Unfortunately, the man behind the mask of Bozo the clown, Art Cervi has died at the age of 86.

Most people were aware that Bozo the clown existed and some of us even grew up with him as a part of our life. He got it started in 1967 and continued in that role until 1980. Perhaps the most interesting part was, he was told that he would only be playing the part for 30 days but it was so successful, he continued to do it for many years. He also has other claims to fame, including being a talent coordinator for channel 9 during their show, Swingin’ Time. For most of us, however, he will always be Bozo the clown.

Most people who were familiar with Bozo the clown did not know the man behind the costume, but he really threw himself into the part. When he eventually stopped playing bozo in 1980, they had a difficult time filling that role. Another man named Jerry Booth took the job for a while, but it was easy to tell that he wasn’t quite as dedicated to it as Art.

WHOA NELLY !!!
Sorry to hear the news that Art Cervi who was BOZO THE CLOWN for several generations passed away today. #RIP pic.twitter.com/zdiWwuagts

Although he wasn’t necessarily the first choice, they didn’t have many other options so they decided to take a chance on him and it paid off. It’s sad that someone who brought so much happiness to so many is now gone.