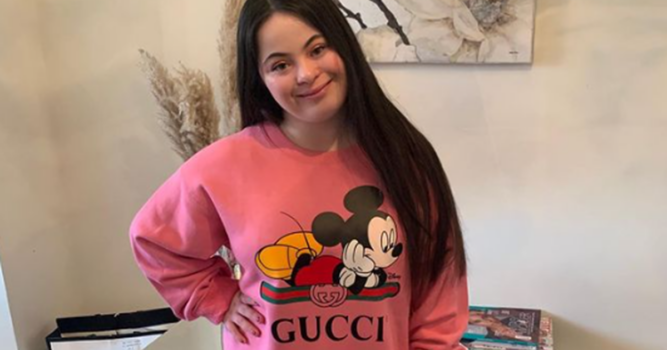 Today, we’re living in a much more inclusive world than we’ve had in times past, especially when it comes to people with disabilities. As time goes by, the world is opening up and recognizing that these remarkable individuals aren’t a burden, but have a lot to contribute to society in many ways. There aren’t just jobs for people with Down syndrome, but they’re also getting jobs in fields that have traditionally excluded them, such as the entertainment industry and the world of high fashion. Currently, multiple fashion designers are making a genuine effort to be more inclusive by signing on more diverse models to their ad campaigns.

A young woman from England is positioned to lead the charge forward. From Essex, Ellie Goldstein is 18 years old and she’s always been talented when it comes to lighting up any stage she finds herself on. She’s a big fan of theater and is currently taking a performing arts course in college. Her true passion, however, is modeling. Having Down syndrome does present some challenges in regards to the opportunity for work in the fashion industry, but Ellie is opening up a lot of doors and shattering barriers that will help people with Down syndrome who are coming behind her to find work in this industry.

Ellie was signed by Zebedee Management when she was referred to them in 2017. The agency famously represents models with disabilities and they’ve kept Ellie busy. Her latest accomplishment is landing the digital cover of Allure magazine. Earlier this year, Ellie appeared in a Gucci Beauty campaign, and now she graced the December 1 cover of Allure. This is the second installment of the magazine’s series titled “The Beauty of Accessibility.”

For the close-up cover photo, Ellie was photographed with pastel blue eyeshadow. She modeled a variety of beauty looks that were soft throughout the spread, donning playful accessories and clothing that beautifully matched the ethereal mood of the shoot.

The co-founder of Zebedee says that Ellie makes everyone around her feel more vibrant and energetic.

Learn more about Ellie in the video below.