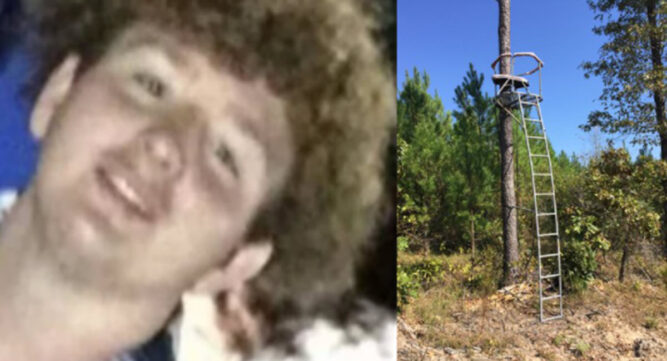 A teen hunter recently died after he fell from his ladder stand and impaled himself on his own rifle. The Daily Mail reports, 17-year-old Justin Lee Smith, a resident of Supply, North Carolina, died on Saturday afternoon after a horrific freak accident in the northwestern part of the county not far from the Alcorn county line. During an interview with WTVA, Mack Wilemon, the corner of Tishomingo County, said that Smith had only fallen about 10 feet from the top of the stand before he was impaled through his chest by the barrel of his rifle when he landed.

The accident happened after the stand had suddenly shifted, turning over to one side. Wilemon also added that the teen could fail 9-1-1 from his phone for help; however, he passed away not long after making that desperate call. The news outlet adds that the teen’s family started a GoFundMe page to help raise money to pay for the young man’s funeral. A message on the fundraising page reads:

In a touching tribute on Facebook, the teen’s grandmother said that her grandson loved to fish as well as hunt, writing:

According to the Daily Mail, a state-funded wildlife agency started an investigation into Wil’s accident. May he rest in peace.