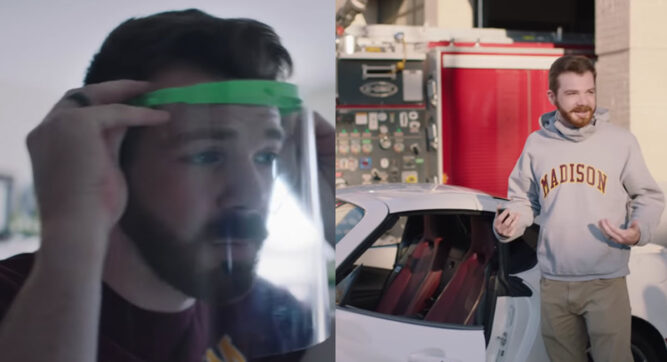 During the COVID-19 pandemic, first-responders worldwide ran into record shortages of personal protective equipment as supplies dwindled and production couldn’t keep up with the demand. During this time, we saw many heroic citizens answer the call to step up and make a difference by making homemade PPE for local hospitals and first-responders. One such person was a middle school shop teacher living in New Jersey named Jason Erdreich, who decided to turn his home into a PPE factory using his 3D printers to create thousands of masks for his local community.

Thanks to his life-saving contribution, Erdreich became one of 50 people Mazda choose to honor with a brand new Mazda MX-5 Miata 100th Anniversary Special Edition. The company said via a press release, the rewards were to thank them for their “selfless acts, creative thinking, and contributions to community.” However, the shop teacher’s efforts didn’t stop there.

Mazda names Technology & Engineering Education alum Jason Erdreich '15 one of their #MazdaHeroes!  Congratulations, Jason!  We are so proud of you! #TCNJ #TCNJEngineering https://t.co/N6iilButvJ pic.twitter.com/VNLR2Ap6JC

He went on to teach other colleagues as well as his students what he learned. Together, they printed over 12,000 PPE for nursing homes, hospitals, and local first-responders.

While making the announcement, the carmaker cited the spirit of “omotenashi,” which refers to the Japanese culture of placing others’ needs first, as one of the biggest reasons the company started their Mazda Heroes program.

Erdrich and two other honorees, a school teacher from Mississippi and an ICU nurse in Texas, were the first few winners, with the rest to be announced throughout December.

Congratulations to Jason and all the Mazda Heroes who made big contributions to their communities and continue to inspire millions.

Jason Erdreich turned his own home into a factory where he used 3D printers to make thousands of masks for his community during the pandemic. Now he's receiving a new Mazda from the car company.https://t.co/S74IIP69Es

You can also watch a video about Jason’s story below.