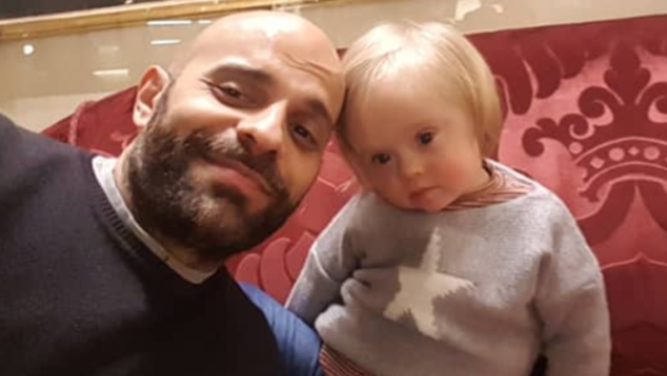 The fortunes of one beautiful little girl have dramatically changed after she was rejected by her mother and then 20 potential adoptive families. The heartwarming saga of Luca Trapanese’s journey to adopting baby Alba has transfixed thousands of folks around the world and across the internet after his story went viral for several reasons. Sadly, the biggest reason this story has garnered so much attention is because of Trapanese’s sexuality. You see, he’s a single gay man, and social services in Italy initially had no intention of allowing a single, homosexual man to adopt this little girl.

Nevertheless, they eventually broke down and made an exception in Luca’s case — although his sexual orientation should have never been a factor in the first place — and we are all glad to see that they’ve come to their senses for Alba’s sake. According to the BBC, the 41-year-old Italian Luca also published a book in which he shares the story of his journey to becoming Alba’s adoptive father. You see, the little girl has Down syndrome. During a radio interview, Trapanese explained that his case was important because it “destroys stereotypes about fatherhood, religion, and family.” Indeed, this father had to fight long and hard just to become a dad to a little girl that everyone seemed to have turned their backs on.

In Italy, it has always been a very complicated matter for homosexual and single parents to adopt a child.

Luca adopted Alba in 2017 when the little girl was only 13 days old and had already suffered rejection from 20 families because of her condition.

What makes this case even more infuriating is Luca’s background. He had experience working for several care centers devoted to caring for people with special needs, and he always wanted to be a father.

That was why, despite not having a partner, he decided to fight on for the right to adopt baby Alba, who now enjoys a wonderful life with her loving dad.

According to the BBC, Alba is a strong-willed little girl who can be a tad bit stubborn sometimes. But, she loves to play and dance, as well as spend time around people.

We wish Luca and beautiful little Alba all the best! This man more than deserves to be a dad, and we’re sure he’ll be a kind, gentle, and loving father to Alba.

What are your thoughts on Luca an Alba’s story? Let us know in the comments section, and please be sure to share their story with your family and friends.