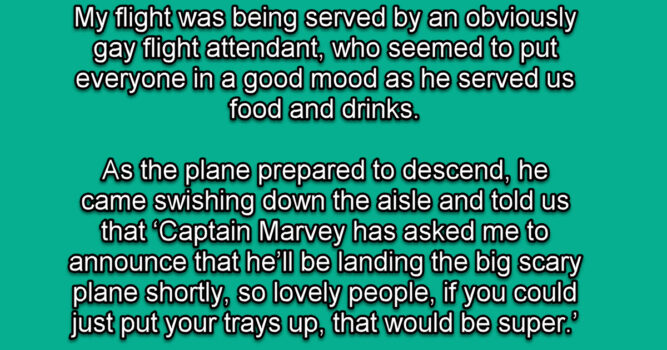 We’ve all had to deal with arrogant and entitled people in life. This is especially true for those of us who work in the hospitality industry. Before the term “Karen” became a thing, workers used to tell horror stories about having to put up with the antics of hostile and abusive customers who believed they were living gods who deserved the utmost deference. Most of the time, these people get their way. However, there are times when they get their just desserts! This joke is about one of those times, and it features a flight attendant who’s not afraid to show a “princess” Karen who’s boss!

My flight was being served by an obviously gay flight attendant, who seemed to put everyone in a good mood as he served us food and drinks. 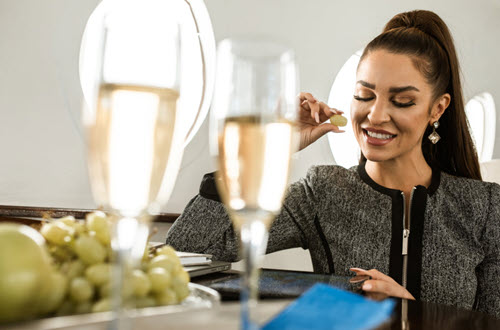 As the plane prepared to descend, he came swishing down the aisle and told us that ‘Captain Marvey has asked me to announce that he’ll be landing the big scary plane shortly, so lovely people, if you could just put your trays up, that would be super.’

On his trip back up the aisle, he noticed this well-dressed woman hadn’t moved a muscle. ‘Perhaps you didn’t hear me over those big brute engines, but I asked you to raise your trazy-poo, so the main man can pitty-pat us on the ground.’

She calmly turned her head and said, ‘In my country, I am called a Princess, and I take orders from no one.’

To which (I swear) the flight attendant replied, without missing a beat, ‘Well, sweet-cheeks, in my country I’m called a Queen, so I outrank you. Tray-up, B****!’ 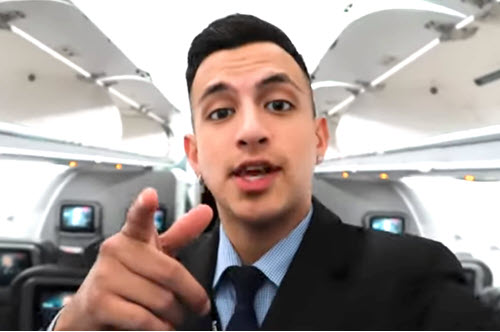 If you enjoyed this joke please be so kind as to pass it on to your friends and family?