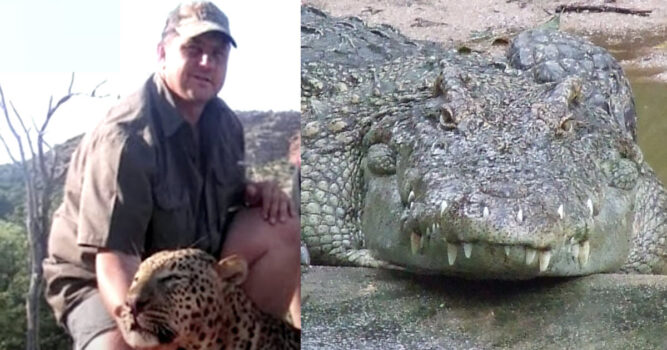 Most folks would agree that hunting for food is a fundamental right for any creature, even humans. However, over the years, there’s been a lot of backlash against hunters who hunt not for food or survival but rather for pleasure and sport. The taking of animal lives just for fun doesn’t sit well with a lot of people, and trophy hunters (also known as poachers) are often reviled by many in public.

A lot of this has to do with how they often posse with the dead animals they killed (often from a great distance in relative safety). Many find this practice, in particular, to be rather sadistic and cruel, disrespecting the life they took for no good reason, to begin with.

However, sometimes nature has a way of evening the score, as was the case with a South African trophy hunter named Scott van Zyl. Back in 2017, van Zyl went missing while conducting one of his hunts. The man was known to organize hunting trips for foreign clients with deep pockets. Authorities believe the man was attacked and eaten by a group of crocodiles somewhere on the banks of the Limpopo River.

Scott Van Zyl made his living taking wealthy clients on “safaris” for the … https://t.co/0H2cpVrxzt pic.twitter.com/pnLt1pSKW0

Van Zyl was joined by his pack of hunting dogs along with a Zimbabwean tracker; however, the two men walked in opposite directions while exploring the bush. The dogs returned to camp without their master, who had left some of his belongings behind in his truck. Rescue teams were sent out, along with helicopters, divers, and trackers, all tasked with finding him.

He's been snapped up Trophy hunter who kills endangered elephants and lions 'eaten by crocodiles'
Crocodiles are thought to have eaten a South African hunter after human remains were found inside two animals. Scott van Zyl disappeared last week after he went on a hunting safari. pic.twitter.com/ygnH9zkXEb

Eventually, they followed van Zyl’s tracks to the riverbank, where they found his backpack. Upon killing two nearby crocodiles, forensic scientists found what looked to be human remains inside of them. However, they could not confirm whether or not they belonged to the hunter.

According to the hunter’s website, van Zyl had completed many hunts and listed blue duikers, rhinos, leopards, elephants, buffalo, antelopes, and lions as some of the target animals he’s killed for sport over the years.

A professional hunter (Scott van Zyl) who mysteriously vanished in April is believed to have been eaten by crocos.https://t.co/AeW4W7RZH6 pic.twitter.com/uEULnJRFwL

For more on this story, you can also watch the video below.

And please be sure to pass this story along to your family and friends.