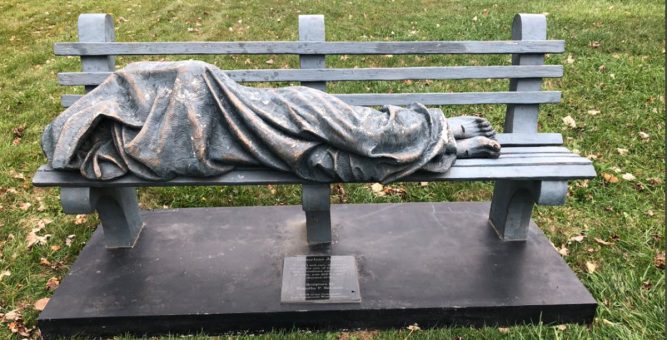 There’s a meme that I see a lot on Facebook that suggests that people would be unkind to Jesus if he walked on the Earth today. First of all, he was a brown-skinned guy, based on the part of the world where he was from. Secondly, he was a homeless refugee at one time. People don’t take kindly to being accused of being uncaring, but a recent incident sort of proved the point of the meme, unfortunately. An artist created a sculpture of “homeless Jesus” and placed him lying down on a park bench. The statue was installed on the grounds of a church in Ohio.

The St. Barnabas Episcopal Church in Bay Village, Ohio wanted to make a profound point about how people who are homeless are treated around the world. Well, the point was made because, within 20 minutes of the sculpture being laid down on the park bench on the church’s grounds, someone called the police.  The sculpture installation is part of a traveling exhibit and St. Barnabas says that similar incidents have occurred at the other churches where the sculpture was installed. The police officer who came to see what was going on indicated that someone reported a man sleeping on a park bench.

St. Barnabas put this statement on their website: “Yes, within just a few minutes of the statue’s arrival, the police were dispatched to investigate a report of a man sleeping on a park bench. This is apparently a common issue with various Homeless Jesus installations around the US and Canada. The caller surely contacted the police out of genuine concern and the responding officer was excellent: he was extremely professional and eager to learn more about the sculpture and its intended message. We have nothing but gratitude and respect for the Bay Village Police Department.”

We're glad to temporarily host this statue of Homeless Jesus to raise awareness of homelessness in Cleveland and remind us that all people are created in the image of God. pic.twitter.com/EKClQm7PFG

The church official who wrote that statement is much more generous than I am because I’m a bit cynical and doubt the “genuine concern” of the caller, but who knows? Maybe it was a nice person who just worried that someone was ill or something. The sculpture was created by a Canadian artist named Timothy Schmalz, but the Community West Foundation purchased it and has been traveling around the country to churches and other religious organizations since October 2018. St. Barnabas Pastor Alex Martin said that the sculpture reminds us all that we don’t have to drive far to find someone who is in desperate need of help.