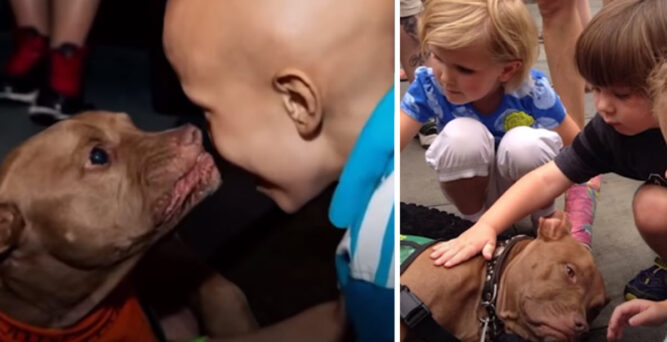 Big dog breeds have a bad reputation, especially when it comes to pit bulls. People think they shouldn’t consider these powerful and lovable dogs as pets because they’re difficult to deal with, but that’s just not true. There have been some news stories that show that these dogs can be dangerous if they have a certain personality, but the fact is, my chihuahua is meaner than most pit bulls I’ve known. The thing is, pit bulls have a powerful jaw that can be dangerous, so if there is a personality problem that’s been taught to them, it can be an issue.  However, let us introduce you to a guy who changes everything.

Aladdin is a former shelter dog who is now a therapy dog. He loves people, especially children, and he has a special ability to sense illness. In fact, he’s so good at what he does that he was once the “Therapy Dog of the Year,” an award presented by the American Humane Association. Now, Aladdin is the spokesdog for Lilo’s Promise, a rescue organization that saves abused pit bulls around the world. When Michele Schaffer adopted Aladdin, she saw the connection that this sweet dog has with people. Within a year, he became a therapy dog with certification. In one incident, Michele recalls something amazing that happened.

Once when some children were petting Aladdin, the big dog was busy scanning the room. He broke away and ran up to one special little boy, who Michele later discovered had brain cancer. Aladdin sensed that this little boy needed him, and he was right. When Aladdin was first brought into the shelter, he was in horrible condition. He was missing twelve of his teeth and had broken legs. Also, his tail was broken in several places, which is excruciating for a dog. Although he should have weighed 45-50 pounds, the starving pup only weighed 18 pounds.

Fortunately, Mark Peters was working and he was associated with a rescue organization called “Don’t Bully Us.” When he met Aladdin, he knew he had to call Michele, who specializes in foster care for emaciated pit bulls. Watch the video below to learn more about this remarkable dog.