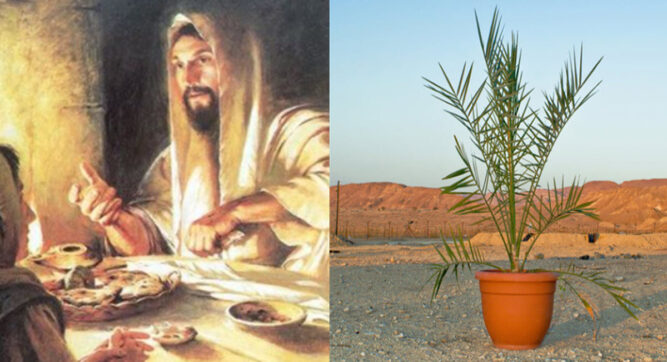 It’s funny when you think about how the most remarkable date palm trees on the planet might not have been revived had not Dr. Sarah Sallon gotten sick while working in India back in 1986. You see, modern antibiotics weren’t helping her; what cured her she believes were some ancient herbal remedies.

“It was just amazing. It was so incredible,” she says. “And then I got very interested. There’s nothing like a doctor cured of their problem to get them interested in something.”

When she moved back to Isreal’s home country and returned to her job at the Hadassah Medical Center located in Jerusalem, Dr. Sallon began looking for local medical plants there. And she discovered a lot of them, but she also learned of ancient plants that seem to have disappeared.

“They’re just historical ghosts,” she says. “Like the famous date plantations along the Dead Sea, 2,000 years ago — described by Pliny; described by Josephus, the first-century historian. They’re not there anymore. They just vanished!”

She soon realized that the seeds from those trees were still around. They’d been recovered from various archaeological dig sites. So she found an archaeologist and proposed trying to harvest some of those seeds to see if they might grow again. At first, the proposal wasn’t meet with a great deal of faith.

“They thought I was mad!” she says. “They didn’t think that this was even conceivable.”

But, Dr. Sallon was persistent and kept pushing the idea, eventually persuading a few archaeologists to provide her with some seeds for her experiment. Over a decade ago, Dr. Sallon and Elaine Solowey, a search with the Arava Insitute of Environmental Studies, planted a few o these ancient palm seeds.

Soon one tree grew, which they named Methuselah. However, the tree had a problem.

John 12:13 KJV
Took branches of palm trees, and went forth to meet him, and cried, Hosanna: Blessed is the King of Israel that cometh in the name of the Lord.https://t.co/lSVqJVEWaH

Now, date trees are a bit strange. They actually have male and female sexes, which means each tree either makes pollen or fertile flowers. But both are required to produce fruit. So Methuselah alone could not be able to re-create ancient dates. The lonely bachelor needed a mate tree.

But soon, Sallon was able to find another archaeologist who had found a whole trove of ancient date seeds during a dig in Qumran, where the ancient texts, commonly known as the Dead Sea scrolls, were also discovered.

This week, Sallon and her colleagues announced in the journal of Science Advances that they had grown another six trees using the ancient seeds. And two of them are female.

“You could say that we found Methuselah a wife,” she says, laughing.

The female trees have yet to flower, but Sallon is hopeful that it might occur this year. If one of the trees bloom, researchers will take pollen from Methuselah to fertilize the flowers. And from there, they will wait for the fruit to grow. These dates are the same dates people ate when Jesus walked the earth.

When Sallon discussed this exciting possibility, her voice filled with excitement and wonder. She says, according to the ancient writers, these dates  “were known for their wonderful sweetness, their very large size, and their ability to be stored for a long time, so they actually were exported around the Roman empire.”

Scientists used 2,000 year old seeds to regrow an extinct species of date tree. The tree long disappeared from the Judean desert but archeologists found seeds on digs. Surprisingly, the seeds worked and grew a male and female of the species…. https://t.co/EaobLXXwls

And now, there a chance these delicious fruits may grow again. For Sallon, this is more than just a science experiment; she sees the growth of these palms and their potential fruit as a sign of hope for the world.  She’s even written a children’s book about it, in which she tells the story from the date. She’s hoping to have it published soon.