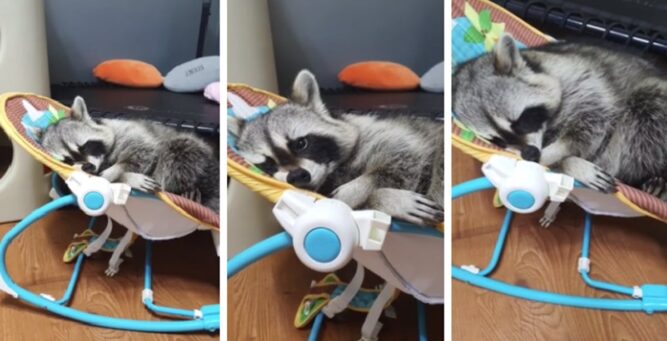 When it comes to wildlife that makes people smile, it’s hard to beat a raccoon. They’re so dang cute. However, it’s important to know that raccoons are common carriers of rabies, and having them around in the wild is risky for this reason. However, some people who keep them as pets can take precautions to avoid this dreaded eventuality, and I’ve heard they make excellent pets. The fact is, people who interact with raccoons say that they’re amazingly affectionate and they can become very attached to their human family members. An adult raccoon in the wild can be mean, but the babies are apparently fairly easy to domesticate.

A raccoon’s original natural habitat is usually mixed and deciduous forests, but you’ll also find raccoons in mountainous areas, coastal marsh areas, and even urban areas. We see raccoons all the time where we live, and my wife is even guilty of putting dog food or scraps out for them a couple of times a week, and more often when it’s really cold. She doesn’t do it more often because she doesn’t want them to be dependent on us, but there’s nothing wrong with helping them out and supplementing their diet. And know this for sure: the next morning after she puts the food out, it’s always gone.

"Look what I made!'"
LOOK HOW PROUD THE RACCOON IS OF ITS BEAUTIFUL WORK.

For a long time, people thought raccoons were solitary creatures, but evidence now shows that they do congregate in groups. Females frequently share a common area, and unrelated males often live together in groups of as many as four male raccoons. They do this to maintain their positions against other male raccoons during mating season, and also hanging out in groups helps them to avoid potential invaders. Their pregnancies last for about 65 days, and when the babies are born, there are typically two to five little ones, which are called “kits.” They’re born in the spring.

The babies are raised by their mothers until fall. Raccoons in captivity have been known to live as long as 20 years or more, but their life expectancy in the wild is much less, as little as one to three years. In the video below, you’ll see a cheeky little raccoon taking a catnap in a baby’s rocker.