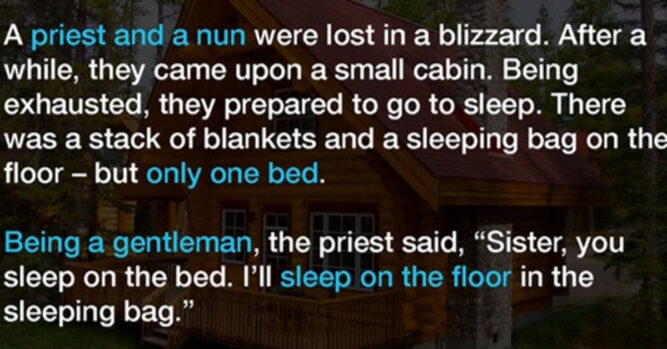 Marriage is a life that many of us choose but that doesn’t mean that it is always going to go smoothly. We all have habits that can sometimes be annoying and sometimes, it is just a matter of putting up with each other more than anything else That being said, the bonds that exist between marriage mates can sometimes take us by surprise. That is perhaps illustrated best in the form of a joke. After all, we all could use a little humor in our marriages.

A priest and a nun were lost in a blizzard. After a while, they came upon a small cabin. Being exhausted, they prepared to go to sleep. There was a stack of blankets and a sleeping bag on the floor – but only one bed.

Being a gentleman, the priest said, “Sister, you sleep on the bed. I’ll sleep on the floor in the sleeping bag.”

Just as he got zipped up in the bag and was beginning to fall asleep, the nun said, “Father, I’m cold.”

He unzipped the sleeping bag, got up, got a blanket and put it on her.

Once again, he got into the sleeping bag, zipped it up and started to drift off to sleep when the nun once again said, “Father, I’m still very cold.”

He unzipped the bag, got up again, put another blanket on her and got into the sleeping bag once again. Just as his eyes closed, she said, “Father, I’m sooooo cold.”

This time, he remained there, giving the woman a wink and a smile, then said, “Sister, I have an idea. We’re out here in the wilderness where no one will ever know what happened. Let’s pretend we’re married.”

The nun purred, “Sounds good to me.”

To which the priest yelled out, “Okay then – get up and get your own stupid blanket!”

Oh, the beauty of marriage!