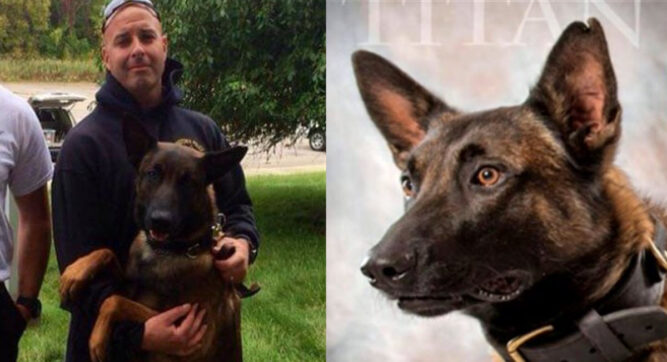 In Pennsylvania, a brave police K-9 passed away after he fell down an elevator shaft while participating in a search for burglary suspects. Police confirmed that shortly before 4 a.m. on Sunday, several officers were dispatched to investigate an old warehouse located in Woodvale, Cambria County. Once they arrived, they were able to quickly locate and arrest two of the five suspects. They then released the K-9 unit to help find the remaining three. Sadly, that’s when tragedy struck. While sweeping the five-story structure, one of the K-9’s, a dog named Titan, fell into an open elevator shaft located on the fourth floor.

Police were able to find and rescue the fallen officer, but sadly, the pup would later die from his injuries. Eventually, police apprehended the other three suspects. Johnstown Police Department Interim Captain Chad Miller said that Titan “served honorably” since 2014. He also noted the courageous dog died “in the line of duty.” Police officers formed a somber procession for the fallen hero Titan, where members of the local community also came out to pay their respects, lining the streets as his body passed by.

K9 Titan
EOW: 11-22-2020
The Johnstown PD is mourning the loss of one of their own, K9 Titan. Titan died this morning when he fell through an unsecured elevator shaft while assisting officers in a warehouse search for 5 suspects. He served honorably since 2014. Rest Easy K9 Titan pic.twitter.com/EkiXvF3DpH

It breaks our hearts whenever we hear stories about brave service animals making the ultimate sacrifice to keep us safe.

Titan gave everything he had to serve his community, and we are certain he will be greatly missed.

Our thoughts and prayers are with Titan’s handler, Officer Brian Stevens, the Stevens family, and department during this very difficult time.

The Chief reports all 5 suspects are now in Police custody. Titan died a hero. #NeverForget pic.twitter.com/qX5quzd40J