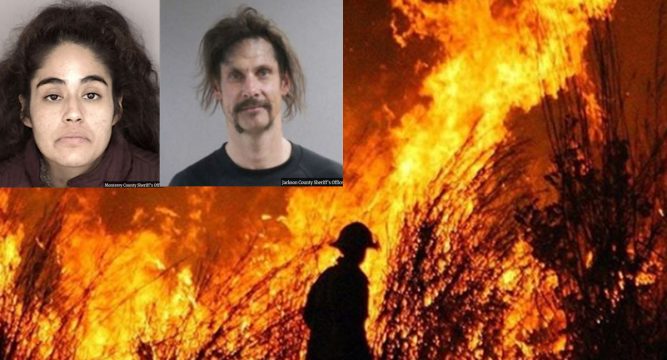 Police have recently arrested four people in connection to fires deliberately set along the West Coast as devastating wildfires continue to wreak havoc across several states. In recent days police have apprehended two men in Washington state, one man in Oregon, and a woman in California who are all now facing charges of arson as thousands of brave firefighters continue to battle the massive flames as they try to bring these fires under control. So far, at least 20 people have lost their lives in California, while eight have died in Oregon. However, dozens of people are still listed as missing. Officials are now warning that residents prepare for a likely ‘mass fatality event.’ In Washington state, a one-year-old boy died after the fires trapped him along with his parents.

At this time, four people are in custody and are believed to have set fires in areas that had already been trying to deal with deadly wildfires. So far, these fires have decimated over two million acres of land, which qualifies as the worst year on record when it comes to land destroyed by fires. Police have still yet to release the names of two of the men in custody who were arrested in Washington state earlier this week. None of the suspects are believed to have any connection, and all are said to have started separate fires.

A 36-year-old from Puyallup was taken into custody on Wednesday after allegedly starting a wildfire on State Route 167 at Meridian.  The next day, the other unidentified suspect was arrested after a fire was started along State Route 7 and State Route 512. he was chased on foot by police before they managed to apprehend him.

Meanwhile, police in Oregon announced on Friday that they were pressing arson charges against a 41-year-old man who allegedly began a fire in southern Oregon earlier in the week as firefighters were battling the Ameda fire. Michael Jarrod Bakkela now faces two counts of arson, 14 counts of reckless endangering, and 15 counts of criminal mischief after he allegedly started a fire, which spread quickly and became part of the Almeda fire.

According to witnesses, Bakkela started setting a fire behind a residence in Phoenix on Tuesday night. The Jackson County Sheriff’s Office reports that deputies arrived at the scene and found Bakkela’ standing close to a very large fire threatening several homes’, the MailOnline reports.

Police said the blaze produced “significant damage” while destroying “numerous homes,” as Bakkela is still being held at the Jackson County Jail. He’s expected to be arraigned on Monday.

In California, 37-year-old Antina Esquivel was arrested on Friday and booked on Arson Charges at Monterey County Jail for her role in allegedly starting an unknown number of wildfires on Highway 101 close to Boronda Road. Later, the Monterey County District Attorney’s Office denied the rumors that Esquivel was a member of Antifa after officials were forced to ask the public to stop engaging in the online sharing of misinformation.

These arrests come as the National Weather Service shared an alarming statistic stating that 87 percent of all wildfires in the United States this year were started by humans. For more on this story, please be sure to watch the video below.