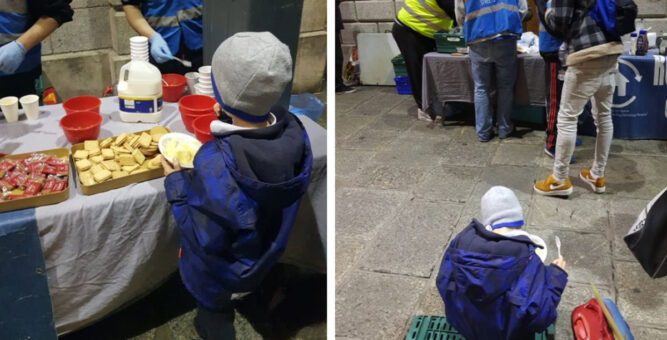 In an incident that was branded a “national shame” in 2019, photos emerged of a little five-year-old boy eating his dinner outside a homeless shelter on the streets of Dublin, Ireland. The photos are heartbreaking and show a little boy who has been called “Sam” sitting down on a food crate at the food station that’s run by Feed Our Homeless. It was just hours after school was out that the little boy showed up to eat his meal. The CEO and founder of the organization, Tony Walsh, slammed Eoghan Murphy, the Minister for Housing, saying the official’s policies have “failed.”

Walsh added that it’s horrifying that this child just left school and is now sitting on a crate to eat. The CEO also said that no child should be required to eat dinner at a food station because his family doesn’t have a home. In fact, Walsh stated that it’s becoming “the norm” for them to see young homeless children and their parents coming to the food station for support and hot food. Walsh went on to demand Murphy’s resignation, saying that it was time for him to “step down” because he has been an utter failure as a housing minister. Walsh says that every night, the organization feeds between 350-400 individuals.

Also, he said that children in need of emergency accommodation come to the shelter with their parents. He states an approximate 20 percent increase during Murphy’s tenure. Sunday night is the busiest night for the organization, and on Sundays, they feed as many as 500 people. When you add up the people “Feed Our Homeless” feeds on Sundays and during the week, they’re feeding upwards of 1,500 people every week. Images also emerged of the same little boy eating food from cardboard in the street.

The images were shared by the Facebook page that the organization runs, and it sparked an outcry on social media.