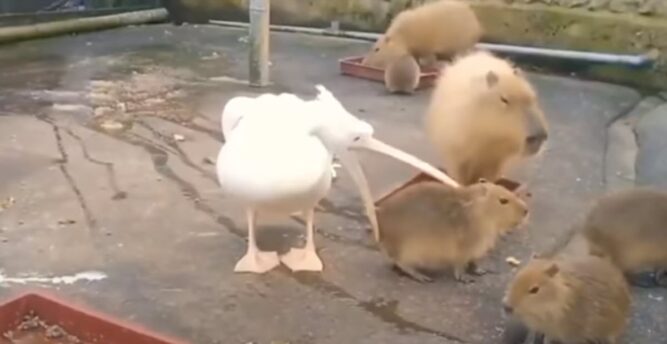 When I saw a video about a pelican trying to eat a baby capybara, I laughed out loud. I know some people who raise capybaras and I know just how adorable these creatures are. It seems like all animals love them, but I’ve never heard of a pelican trying to eat one before today. However,  not many people know a lot about this giant rodent. The capybara is native to South America and is a cavy rodent. As it turns out, capybaras are the largest living rodents in the entire world. They’re closely related to rock cavies and guinea pigs, but much larger.

An adult capybara can grow up to 4.40 feet in length and stand as tall as 24 inches. They’re also quite chonky creatures, weighing in between 162 and 201 pounds, and the females typically weigh more than the males. Their heavy bodies are barrel-shaped and they have short heads. The fur on the upper parts of their bodies is reddish-brown in color, while the fur underneath is yellowish-brown. For their natural habitat, capys inhabit dense forests and savannas, and they live near water sources like lakes and rivers. Capybaras are a very social species and that explains why other animals seem to like to cuddle with them.

When they’re in the wild, capybaras usually live in groups of 10-20 individuals, but experts have seen groups as large as 100. Believe it or not, capybaras are a meat source for some people, and they’re hunted not just for that but also for their hide. Apparently, the grease from their thick fatty skin is desired by some folks who hunt them. Luckily, capybaras aren’t a threatened species. For food, they only eat aquatic plants and grasses, so they’re herbivores. They also have been known to munch on tree bark and fruit. However, they tend to be picky eaters and they’ll feed off of their favorite leaves and discard the other ones nearby.

In the video below, it’s hard to tell if the pelican is playing or trying to catch a snack of its own. It’s really cute and funny, though. Enjoy!