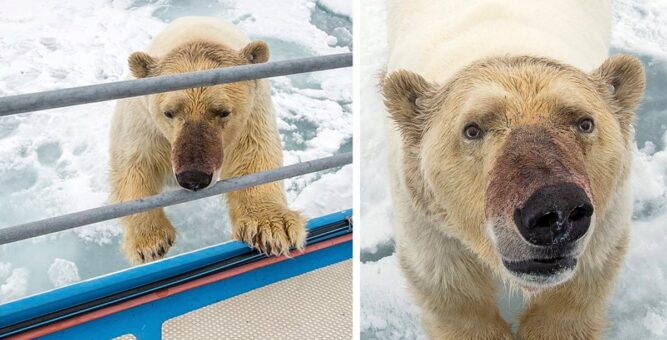 It’s a brave soul who hops on a boat to look for wildlife in the dead of winter, and even braver when that excursion is in the Arctic. Recently, a group of passengers aboard a boat at Svalbard, which is located in the Norwegian Arctic, got all that they dreamed they would get from such a trip. The group stumbled upon a polar bear that was eating a freshly killed walrus carcass when the bear unexpectedly decided to abandon his food to check out the humans in the boat that was nearby. It’s likely because he had just enjoyed a big meal that the bear was fairly friendly and curious.

Winters are long in the Arctic and it’s not an easy life. Creatures who live there have to endure months of darkness and extremely cold winds. However, this is the life polar bears are accustomed to and they survive. On the boat was a well-known photographer named Franco Banfi, who goes around the world photographing wildlife. Banfi was able to capture some remarkable photos, and to the astonishment of everyone on the boat, the bear tried to actually clamber in. A quick-thinking captain, who has probably encountered polar bears before, sent the beautiful animal on its way with a gentle tap on the nose.

It seems that the captain knew just how to deal with the curious bear. When they first saw him, he was about 20 meters away eating his prey. However, his curiosity got the better of him, it seems. The group was excited to encounter the bear, and they took the trip with the possibility of seeing not just polar bears, but also arctic foxes, birds, and walruses. Banfi explained that they were on the trip to enjoy the wildlife that very few of us would ever have the opportunity to see. Polar bears can easily kill a person if they’re hungry, but this one was merely curious.

A curious polar bear surprises a ship's crew by trying to clamber aboard. Pictures of the curious incident were captured by photographer Franco Banfi, who was on board the vessel near Svalbard, in the Norwegian Arctic. https://t.co/CxDMDG00mr pic.twitter.com/SygIfpxTSk

Banfi described the encounter as not just fulfilling but also “very intense. The group agreed that it was a chance that only comes once in a lifetime for most people who seek such an opportunity.

In the video below, enjoy watching some polar bear cubs learn how to walk.