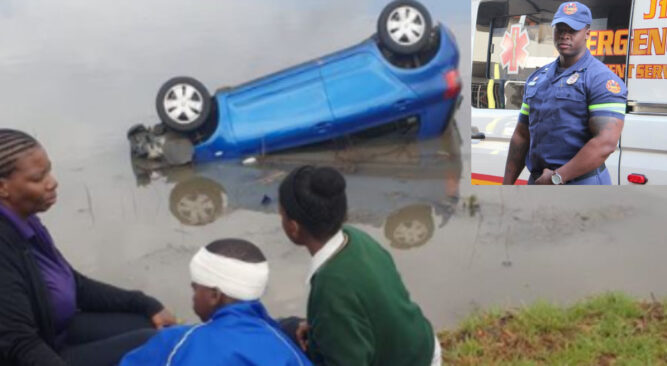 For firefighters worldwide, they don’t clock-in and out from their responsibilities like most of us. Their heroic duties don’t end just because they’re not on the job. Day after day, they face dangerous hazards such as fires and floods while providing life-saving medical treatment to those in need, as many are also emergency service technicians. In South Africa, Prince Xwide Masuku from Katlehong knows what it means always to be ready to be of service. The 32-year-old paramedic and firefighter work for the City of Johannesburg EMS. And recently, he became a hero to a family of three who is alive today thanks to his brave actions.

Masuku was on his way home after finishing a night shift on November 1 when suddenly he noticed a car swerving on the road in front of him. It was raining hard that weekend, so the roads were flooded with water. The other driver soon lost control of their car after hydroplaning and flew into a flooded area just off the road. Onlookers watched in horror, some recording on their phones as the car began to sink into the water. However, no one moved to help the people trapped in the car except Masuku, who didn’t hesitate to plunge into the water.

Within minutes, he began dragging each person out one by one, beginning with a little girl, then her brother, and finally their mom. At that point, other folks joined in to help Masuku bring the soaked family back to land. And within minutes, emergency services arrived on the scene to treat their injuries.

While the mom and little boy were experiencing neck pain, all of them were in relatively good health thanks to the efforts of Masuku.

However, Masuku says that he was just doing his job.

As for the brave hero, he said he’s just happy he was in the right place at the right time to make a difference. Masuku also hopes his actions will inspire others to step up and be heroes for someone in their time of need.

There’s no doubt the world would be a much better place with more heroes around like him!

And as a proud member of the city’s drill squad, Masuku was honored with a special salute for his service. You can watch the video of their tribute below.