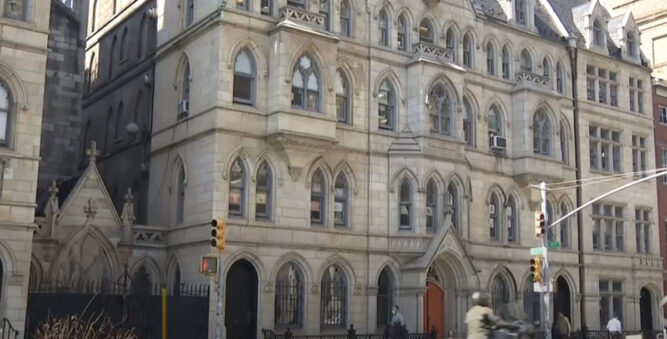 A religious private school in New York City has done something that has some people up in arms. Grace Church School is encouraging students, teachers, and parents to avoid using phrases like “mom” and “dad” so that children who don’t have these figures in their lives don’t feel left out. The school hopes to discard the usage of words that make an assumption. Instead, they’re encouraging people to use terms like “grownups” or “family” because unfortunately, not every child has a mom or a dad. Many children are being raised by other adults in their lives, including grandparents and other relatives.

The school is hoping to provide its community with a set of phrases that better align with the school’s vision and mission. They even published a guide that could be a great template for other schools to adopt called the “Inclusive Language Guide.” The 12-page guide was adapted from Bank Street Language Values and the Glossary Pilot, and addresses several issues, including gender words, family words and phrases, sexual orientation, race and ethnicity, and being able. Socioeconomics is also addressed, with the guide suggesting that instead of asking children “where did you go for vacation,” ask the child to name something that they learned during the school break.

I taught in NYC 20 years ago. This practice was all ready started in the private schools and Catholic schools. Not all kids are raised by a mom and dad.

Needless to say, there are people who have a problem with being inclusive, but for the most part, people are behind this move. The fact that it’s a religious school that is bringing forth this kind of positive change is telling as well. One Twitter user said “this is out of control,” and they’re suggesting that the school is trying to be a part of the “woke culture.” One person noted that the school isn’t trying to “cancel” the use of the words “mom” and “dad,” but the school is a private school so they can do things as they wish.

And who decides who's innocent? I've seen more outrage from the alt left & it's "cancelings" which r out of hand. How is not being able to say "mom" or "dad" in a school be OK? & that's just 1 of the many examples. https://t.co/Ad2vJaisAF

In my opinion, if a simple change in language helps children to feel more included, it’s a good thing and an easy thing for all of us to do. Here’s a video about this story.