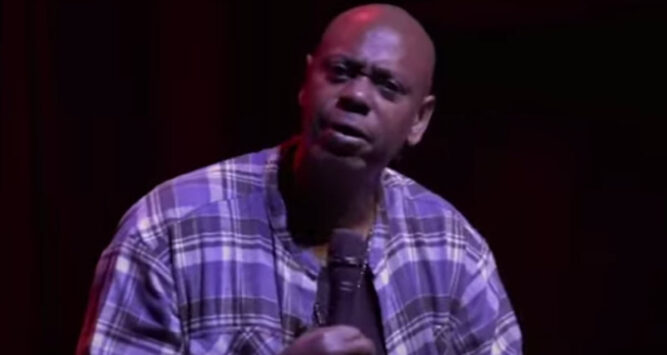 Recently, comedian Dave Chappelle took a direct shot at his former bosses at ViacomCBS (Comedy Central) over their licensing deal for his wildly-popular series, “Chappelle’s Show,” without paying the artist a single red cent. The comedian decided to talk about the incident during his most recent Saturday Night Live monologue. In a video titled “Unforgiven,” which was posted on his Instagram page, Chappelle explains how he talked to the streaming giant Netflix, where he’d also made a lucrative deal for his newest stand-up specials, and told them about how he felt concerning ViacomCBS and their unfair licensing deals involving his work.

The comedian said that he really just wanted to vent his frustration over the platform streaming his show. Still, Netflix went one step beyond and agreed to remove the series from their service immediately. Netflix had paid ViacomCBS for non-exclusive streaming rights for the show but decided that it was more important to keep Chappelle happy. However, Netflix wasn’t the only streaming service showing “Chapelle’s Show” in fact, it is still available on Comedy Central, CBS All Access, and HBO Max. In the “Unforgiven” video, Chappelle shares some deeply personal stories about his experiences as an aspiring stand-up comic when he started in his early teens.

The comedian spoke of how an older comedian once stole one of his jokes and physically intimidated him when he asked that he not use it again. He also talked about how he learned a profound lesson after nearly getting beaten to a pulp by a hulking street hustler who ran a game of three-card monte (a game that cost him his last $60).

The Chappelle show is literally one of the most iconic pieces of work of @DaveChappelle ‘s career. The fact that he got paid pennies from Comedy Central and STILL isn’t being paid properly after that show made MILLIONS, after the cultural impact it had…yeah boycott that shit

Chappelle weaved a compelling story leading up to his contract signing with Comedy Central when he was 28-years-old. The comedian explained how at the time, he was broke, had a baby on the way, and while the deal didn’t pay him a lot of money, it was “something.”

Boycott until they PAY him!!!! I love @DaveChappelle like family! I’m behind him with my whole heart! Thanks @netflix for having his back! pic.twitter.com/YSy5HZwcNq

He also mentioned how he learned much later that the network reserved the right to profit from his likeness, image, art, and name “in perpetuity,” which is a term used in contracts that basically means until the end of time or forever. 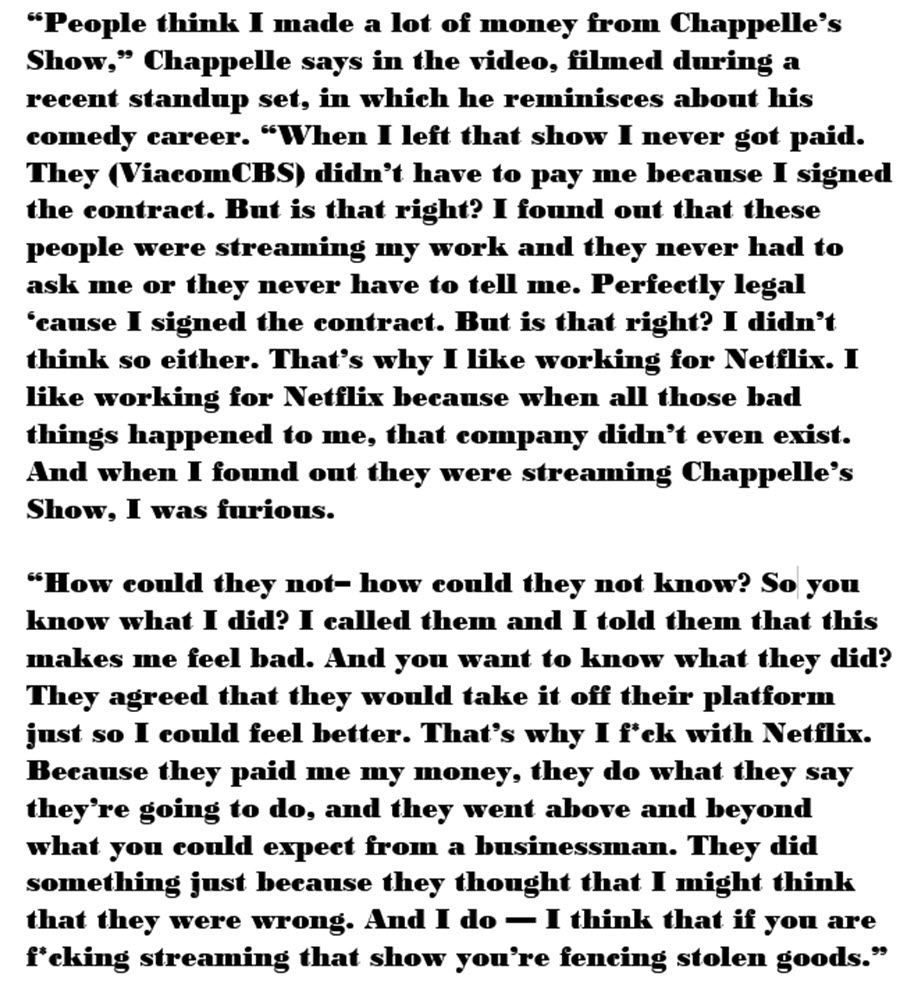 Chapelle made the same personal appeal to his fans that he made during his SNL monologue, in which he urged them to boycott his show.

From 2003 to 2006, Dave Chapelle was the executive producer, co-creator, and star of Chapelle’s Show and enjoyed a short but incredibly successful (popularity-wise) run on Comedy Central.

As much as I love this show, my favorite comedian @DaveChappelle never fairly got paid for his show. He’s asking everyone to boycott it if you haven’t heard so let’s stand with Em! pic.twitter.com/PuYZyuMI4I

Today, Chappelle has a four-year deal to produce comedy specials on Netflix, and the comedian now says he couldn’t be happier with his new partner.

You can watch the complete “Unforgiven” video below.