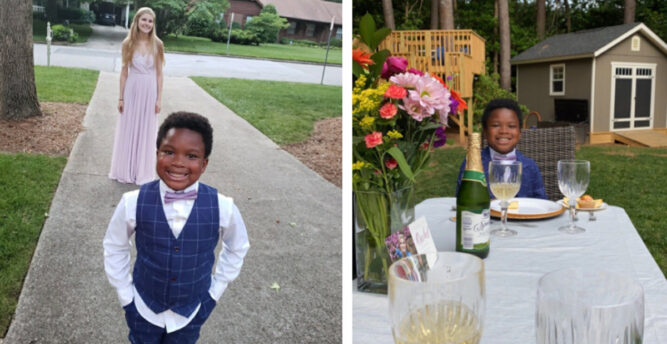 A little seven-year-old boy from North Carolina was heartbroken when he found out that his nanny, Rachel, wasn’t going to get to have her prom because of the pandemic. When he found out, he decided that he knew exactly what to do. He was going to give her a prom himself. The little boy, whose name is Curtis, planned the whole evening, including their favorite snack that would be served as an appetizer. He even used a pool noodle to keep socially distanced from Rachel. In an interview with ABC11 Eye Witness News, Curtis said that he planned it because he knew that Rachel would want to see him a lot.

He added that she’s one of the best people he knows. Curtis’s mom even said that he planned the DJ tracklist that included all of Rachel’s favorite music. She said that he was very excited and wanted to make sure the whole night was absolutely perfect. He even put on a suit and picked out his favorite bowtie, one that matched Rachel’s prom dress. He wanted to impress her and that’s exactly what happened. Rachel said that she had a wonderful time at her prom. While putting her dress on, she was a bit sad that she didn’t get a prom, but once she saw the trouble Curtis went to, her sadness went away.

My daughter has been a nanny for this amazing kid for over a year. When he realized she wouldn’t have a senior prom, he wanted to throw her one. He planned a socially distant prom, complete with dancing & her favorite foods. @somegoodnews @ABC11_WTVD #bestpromever #SomeGoodNews pic.twitter.com/8T8LY3DQZw

As it turns out, it was the first time she had seen Curtis in two months, and she really missed him. Apparently, this thoughtful little boy missed Rachel, too. Rachel said that it was a lot of fun and she appreciated it so much. Above all, Curtis was the perfect little gentleman, she said. He was waiting outside with the pool noodle and led her into his backyard. He had all of her favorite foods on hand and she could tell he put a lot of work into it.

In a video that Rachel’s mom posted to Twitter, the two are dancing up a storm. Watch this video below.