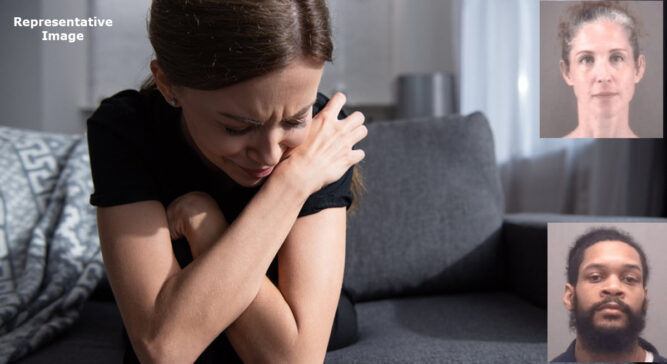 A 34-year-old man was arrested for raping his own daughter for several years until she became pregnant. The sexual abuse reportedly started when she was just eight-years-old and continued even after the child became pregnant with his child at age 15. Brandon Helms, who was married to the girl’s mom, was eventually convicted for several aggravated sexual assault charges on a minor and rape. On October 29, 2019, a judge sentenced Helms to a minimum of 88 years in prison. Meanwhile, according to Journal Now, the girl’s mother was also sentenced to serve 18-years in prison for her role in this heinous crime.

When she was interrogated, the woman allegedly confessed that she wished for her own daughter, who’s now 17, to be her husband’s “concubine.” Tragically, the child’s nightmare didn’t end after giving birth at 15, as Helms continued raping her. The girl, identified in court records as Marcy along with a few other children, lived in an old abandoned house that wasn’t fit for occupancy. In fact, local authorities had orders for the house to be demolished. The family’s living conditions were so shocking that the child was forced to give birth on top of a filthy table.  Neither Marcy nor her child received any medical care.

A North Carolina woman has been given a prison sentence after prosecutors said she did nothing to stop her husband from repeatedly raping a 15-year-old girl over several years. https://t.co/17x3QWNnKR pic.twitter.com/GfDirRWZeW

Wannetta Jones, a social worker, arrived at the home on May 8, after social services received an anonymous tip. Pansy Glanton, the Assistant District Attorney, would recall Jones’ account to the court via a written statement:

They would’ve given me a prison sentence too, cause I would’ve murdered him the first time. Women out here putting men over their children are the worst types of women & mothers. @4blackstockings @michelanna @radcliffe_tonya

When the girl was first questioned, she claimed not to know who her child’s father was. But during a medical exam at the Brenner Children’s hospital, she later confided in doctors about her hellish ordeal.

I'm right there with you!! He better be glad the POLICE got him before I did. If I was the MOTHER, HE WOULD NOT HAVE MADE IT TO THE POLICE!!! It is mind blowing that some women will not protect their child to their dying BREATH. I WOULD EVEN IF IT WASN'T MY CHILD.

The Forsyth County judge would later find Helms guilty of 20 charges connected to Marcy’s sexual abuse and rape, including abuse of a child involving a sexual act, the statutory rape of a child younger than 15, and taking indecent liberties with a child.