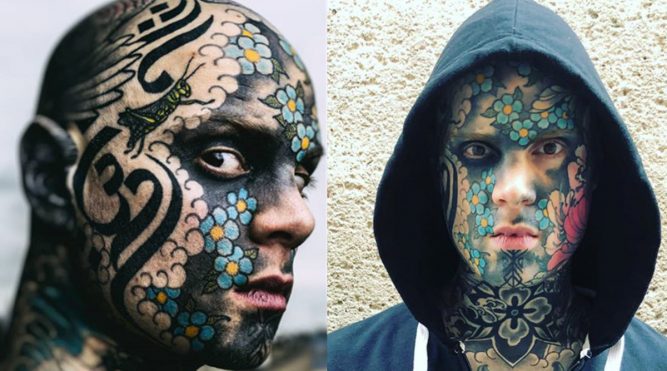 A French man with tattoos all over his body claim that his career was cut short because of his passion for ink. 35-year-old Sylvain Helaine is a grade school teacher who’s also an avid body modification enthusiast. In fact, Helaine has spent well over 450 hours in the chair, getting tattoos that cover his face, body, and tongue. And he even had the whites of his eyes tattooed black! Despite his appearance, Helaine is a very experienced school teacher who was instructing kindergarten children last year when he experiences the first major issue in his career related to his appearance. A couple complained that his appearance was giving their child nightmares, and as a result, Helaine was informed that he was no longer allowed to teach children below the age of 6.

Now, Helaine had been a teacher for around 12 years, and 2020 was the first year his appearance had ever become an issue at his job. Helaine decided it was time to speak out about this heartbreaking experience, which changed his career, perhaps forever. He began getting tattooed when he was 27 while working as an instructor in London, England. He says he was in the middle of what was described as an existential crisis at the time.

“Getting tattoos is my passion,” he told Reuters.

In 2019, Helaine transferred to Docteur Morere Elementary School, located in the Paris suburb of Palaiseau, where he taught kindergarten. Within a few months, the parents filed a complaint with the school, stating that Helaine’s gothic appearance gave their little one nightmares. It should be noted that the child in question wasn’t even one of his students.

According to Helaine, all of his students were completely comfortable with his appearance.

“All of my students and their parents were always cool with me because basically they knew me,” he said. “It’s only when people see me from far away that they can assume the worst.”

A couple of months later,  the school decided to fire Helaine. They feared his appearance was too disturbing for their students, despite never receiving any more than a single complaint.

“I think the decision they took was quite sad,” Sylvain said.

A representative for the school told Reuters that the school did not fire Helaine; rather, they believed they reached a mutual agreement and that he understood their position. Children under 6 “could be frightened by his appearance,” they reasoned.

Now, it’s understandable how most folks could see Helaine’s body modifications as extreme; however, the teacher says that he’s always found children to be far more accepting than adults.

“There is always a moment of stunned silence,” he told The Jakarta Post. “But when I introduce myself and they see that I am a teacher like all the others, it’s cool.”

“Children who see me learn tolerance of others,” he explained. “When they are adults they may be less likely to be racist or homophobic, and they will not look at disabled people as if they were something from a circus.”

And to Helaine, that is the best lesson a student could learn once they get to know him.

In fact, his students agree.

“You should not judge him because of his appearance,” said 9-year-old Gayane.

Another student named Loic opined that it’s “worrying that people get stuck on physical appearance. It is mostly the parents who react because today young people are more educated about respecting all appearances.”

How can parents teach children not to “judge a book by its cover,” and justify judging this man?  You can learn more about this story in the video below.