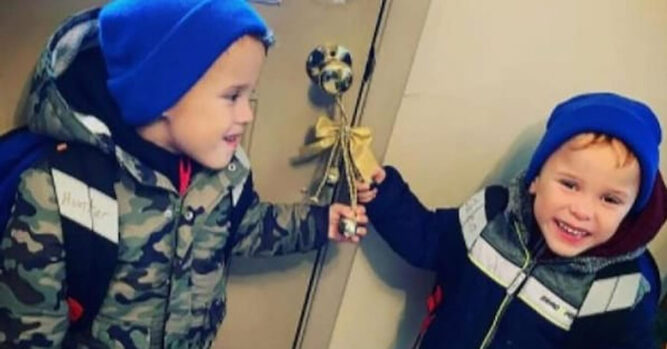 Although we may have many examples of love in our lives, there is nothing quite like the love that a mother shows her children. It’s a natural type of love that just seems to be present from the time that a baby is born and many times, much earlier. Of course, there are differences in many families but at times, we hear about the love of a mother to the extent that they are willing to make the ultimate sacrifice for their children. Not every mother is given the opportunity to do so, but when it does happen, it’s an incredible thing to see.

According to FOX2 Detroit, a mother by the name of Hillarie Galazka was provided with the opportunity and without thinking, she jumped into action and saved the lives of her twin children. Owen and Hunter would likely have died in the car crash that was caused by a driver who was speeding and should not have been on the road. This loving mother used her own body to shield the babies from the terrible car accident. After the accident, the boys say that their mother opened her eyes and looked at them and then closed her eyes again.

Hillarie Galazka, 29, saved her 5-year-old twin sons by throwing her body on top of them during a car crash on the I-96, according to her family. https://t.co/DxfHsq1aEq

Galazka was only 29 years old when she was driving home in Lincoln Park, Michigan. She had her five-year-old twin boys in the car at the time but her other child was at home. It happened when a 25-year-old driver was speeding at 90 miles an hour and ran into the back of her Saturn. Without hesitation, she took most of the impact of the accident by throwing her body in front of the twins.

Both of the boys are not only alive, they are doing quite well. They had some minor scratches but other than that, it was the mother that took most of the impact. She is going to be missed by her children, as well as her mother who said that her daughter was her best friend.

The driver fled the scene after the accident but they found him later at a hospital. It seems as if he had quite a few warrants out for his arrest and he certainly had no business driving a vehicle, let alone driving it that fast.