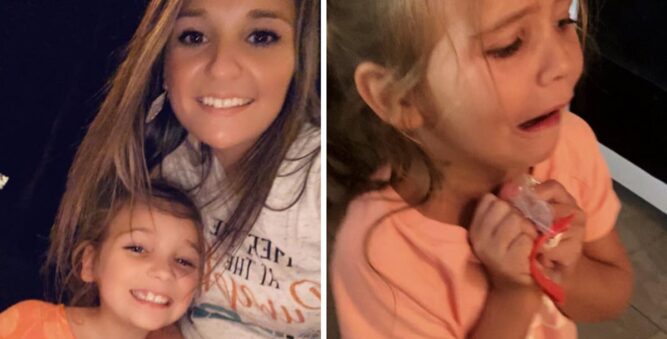 Parents around the world were applauding a Florida mom in 2019 when she taught her little girl a lesson she will never forget. Haley Hassell, a Pensacola, Florida woman, bought her little girl, Presleigh, a cute new pencil case that she thought she would love. However, instead of loving the pencil case and being appreciative, Presleigh did something unimaginable. She threw it in the trash and said she hated it. Now, to be fair, Presleigh was only six years old at the time, and sometimes it takes some skillful parenting to teach kids basic appreciation, and that’s what Haley decided to do.

Presleigh had just started first grade and was asking for a specific brand of pencil box called LOL. Haley found one after going to three different stores and said that she was trying to get her little girl the cool one that she wanted because Presleigh was nervous about starting school, as most kids are. In an interview with Good Morning America, Haley explained that when Presleigh got home from school, Haley told her she had a surprise for her. To Haley’s astonishment, Presleigh started at it and threw it in the trash before marching off to her bedroom and slamming the door. But here’s Presleigh’s explanation.

She said that everyone in the class had that one and it’s “stupid.” She then said that she didn’t want it anymore. Naturally, Haley was shocked and horrified at her little angel’s reaction. However, she was thinking quickly and said that she had the one that Presleigh was going to use. When she came back, she was holding a plain plastic ziplock bag. Now it was Presleigh’s turn to be mortified, and suddenly the LOL Box seemed ideal. However, Haley knew she had to teach her little girl a lesson. She informed Presleigh that they would be sending the LOL box to a little girl who needed it.

Haley sat Presleigh down and explained that there are people whose parents can’t afford to buy school supplies for them and that Presleigh needs to think about things like this before being unappreciative. They ended up mailing the pencil box to a little five-year-old girl in Utah, along with some more needed school supplies. Presleigh got totally on board with that and enjoyed shopping for the other little girl. For the most part, parents on Facebook were supportive, but a few called Haley a “monster.” Hey, you can’t please everyone.