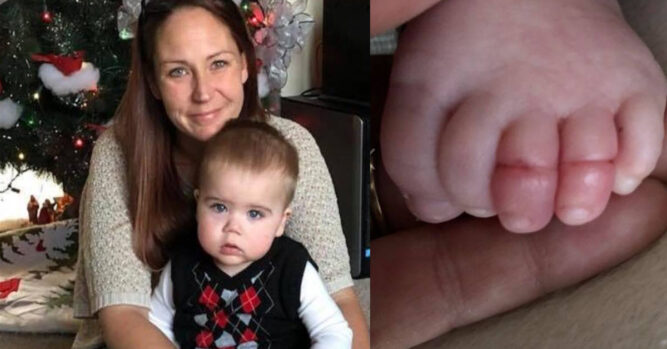 New parents often find themselves overwhelmed with decisions and worries concerning their children and their abilities to keep them safe, happy, and healthy. When their little bundle of joy arrives, there are just so many things that parents have to do and get used to. They must now look at the world in a completely different way and be on the alert for anything that could possibly harm their child. However, there are some things that we as parents can’t always anticipate, as one Michigan mom found out when her child became the victim of a very common problem that very few people talk about.

It wasn’t a sickness or hazardous toy, but rather so simple that for many parents, it flies right under their radar. Heather’s little boy, Jacob, was about two weeks old when she put him down one day to take a nap. Jacob slept for a few hours, and when he woke up, Heather changed his diaper. But, while she was checking his diaper, the mom noticed that her son had something wrong with his toes. She observed that they had turned a very dark shade of blue.  Jacob’s dad, Tommy, was also in the room that day to help out. The couple was trying to save a bit of time that day because they had plans to attend a party that night.  Heather wrote in a Facebook post:

“I handed him to his dad Tommy to put socks on him when Tommy realized his two toes were blue and tied together with a strand of hair!!! I immediately took off what I could and had to take him to the ER where we spent an hour and a team of 5 doctors trying to get the rest of MY HAIR off his two toes…”

When she told her doctor, Heather learned that if she had not removed the hair before taking her son to the hospital, they might have had to amputate Jacob’s toes! Heather is now on a mission to let parents know to check their baby’s toes after her son fell victim to what’s known as “hair tourniquet syndrome.”

“CHECK YOUR BABYS TOES AS OFTEN AS YOU CAN!!! And if you have a baby boy even his PENIS. Yes I said penis… they are such tiny baby’s and our hair can be such a hazard but it’s something that we never really pay attention to.. so plz share this with all your mom friends with little babies!!!!”

You can see in the picture below Jacob’s toes 12 hours after she removed the hair. It’s hard to imagine just how much pain this poor little guy was in! But thankfully, he suffered no lasting damage from his ordeal.

Learn more about “hair tourniquet syndrome” and how you can avoid it in the video below.