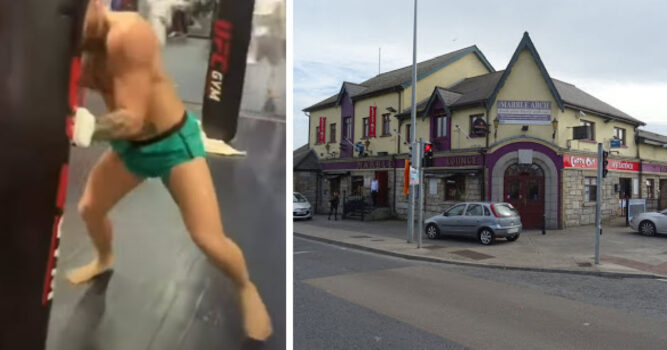 When it comes to MMA fighters, they’re a colorful lot of folks and you never know what might happen next in the world of MMA fighting. In 2019, celebrated Irish fighter Conor McGregor was caught on CCTV punching an old man who refused to enjoy a shot of whiskey with him. McGregor was promoting his personal Irish whiskey brand, Proper No. Twelve, and offered everyone at the bar a shot for free. Des Keough, a 50-year-old man who just happened to be in the wrong place at the wrong time, apparently didn’t want a shot of whiskey that day, and that offended McGregor.

As a result, McGregor punched him before he was dragged away by his entourage. Ultimately, the Dublin District Court fined the fighter £860 GBP (about $1,193 USD), which was just pennies to a successful fighter like McGregor. The fighter later issued an official apology, but it seems that situation brewed in McGregor’s mind all this time. Now, he has bought the pub, the Marble Arch, where the incident happened for £2 million GBP (about $2.7 million USD) and he seems to have done it just so he could ban Keogh from the pub. That’s a guy who holds a grudge and of course, he has a mean punch.

Hey guys, I’m thinking about buying Manchester United!
What do you think?

The pub is located in Dublin and McGregor has been working to expand his own business interests in the area where the pub is. A writer from the publication The Currency posted a link to the article about McGregor buying the pub on Twitter, and the champ was quick to respond, saying, “Ye and your mans (sic) barred.” So it seems to have definitely been a revenge move. I guess when you’re Conor McGregor, you can afford expensive grudges like this, eh?

Ye and your mans barred https://t.co/aVM5mcIA3F

In the video, you can see McGregor clearly hitting Keogh, and his response was that whatever comes his way, he will “face it.” He noted that he tried to make amends because he was in the wrong.

Here’s the video with the original scene.