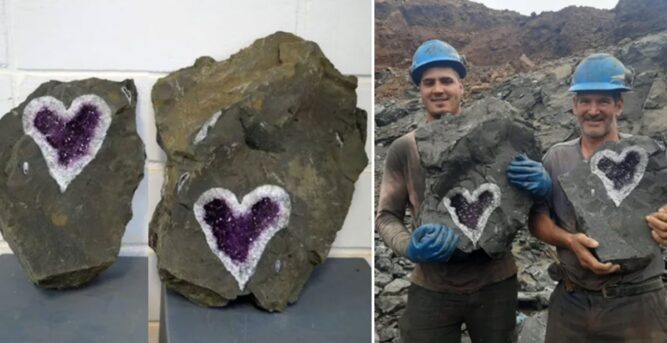 As humans, we created the rather arbitrary shape of the heart that’s not really at all what a heart is shaped like, at least not the hearts of any living animals, including humans. The romantic heart that we’ve created shows two equal curves that meet at a point and have a cusp at the top. It’s a symbol that dates back to the 5th and 6th centuries B.C. It’s a very cute little symbol and we modern humans have made good use of it, too, even if it’s not representative of an actual human heart. However, it seems that Mother Nature herself may like the shape.

A group of miners in Uruguay recently discovered something they’ve never seen before and will probably never see again. The men were working at the Uruguay Minerals company in a mine near Santa Rosa in Artigas, Uruguay, which is in the Catalan area near the border that the country shares with Brazil. The company’s representative, Marcos Lorenzelli, said that it was just a normal day at the mine, and the workers had just been allowed in the area to look for more geodes in a new mine. As it turns out, the basalt was very hard, Marcos said, and one of the men even made a joke about it.

The miner said that they would have to find something “amazing” because of how hard it was to do the work in that particular mine. Lo and behold, what they found was a one-of-a-kind heart-shaped amethyst. Their hard work paid off in spades because they got to see something so beautiful that it defies the imagination. It took them two or three hours to move one particular basalt rock and when the excavator opened it, the heart-shaped amethyst was revealed. Geodes come in all sorts of sizes and shapes, so finding something unusual isn’t that rare, but this pair of hearts was so perfectly proportioned that it’s hard to believe.

When the company shared the photos of the heart-shaped geodes on their website and social media, the photos quickly went viral and it’s easy to see why. We all need a little more love in our lives right now, and these beautiful stones were perfect.