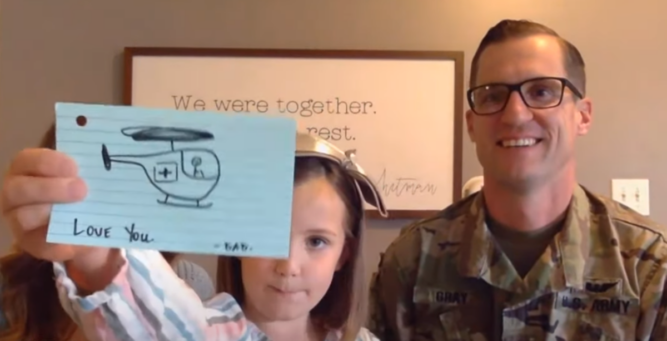 When men and women who are in the military get deployed, they leave behind parents, spouses, and children who love and miss them. It’s not an easy life at all, but some people feel called to serve their countries and they’re willing to make the sacrifices that come along with that. With the internet and other tools, it’s become easier for military parents to stay in touch with their children, but one dad made the decision to do something the old fashioned way. Staff Sgt. Philip Gray is missing a lot of precious days with his little girl, seven-year-old Rosie, but when he was deployed last year, he did something remarkable.

Philip decided to leave behind 270 notes for Rosie so that she would have a hand-written note from him every single day that he was gone. For most of the year, Philip was deployed far away in Afghanistan, but having the notes made it a little more bearable for Rosie. The notes were for her lunchbox and every single one of them was handwritten just for her. He was expecting to be gone from home for 270 days, so that’s how the magic number came up. However, it was his loving wife, Kristen, who gave him the idea. The notes said things like “You are supergirl” and “I love you, Booger Butt.”

Reposting the original this Veterans Day. 🇺🇸 Thank you to @kellyclarksonshow for finding our story and sharing. 🤍 #militaryfamily #deployment

In fact, Philip is very big on what Kristen calls “feel-good words” and words that make Rosie understand “girl power.” He always told her in the notes how smart she is and encouraged her to run really fast in P.E. class. Kristen said that notes meant everything to Rosie, and we can only imagine. The notes had not just words of affirmation, but also they frequently had doodles and drawings that would make the little girl laugh or smile.

Philip left in October 2019 and was able to make it home in August 2020, just before Rosie’s birthday. Watch the heartwarming video below.