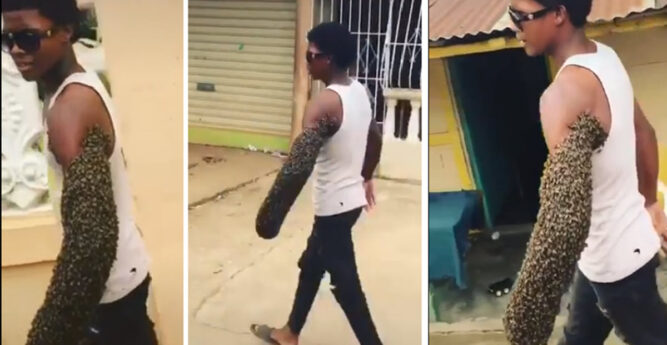 Beekeepers are incredibly skilled people, and one man recently went viral with a shocking video that is really uncomfortable to watch. In the video, the young man is walking along the street with thousands of bees swarming his arm. The video has the internet freaking out, but remarkably the guy in the video is completely calm. The video was captured in the Dominican Republic, and the person operating the camera asked the beekeeper why the bees don’t sting him. The young man replies, “They know their owner.” The cameraman also asked if the bees make honey on him, and the young beekeeper said they do not.

When the cameraman asked the beekeeper if the bees know where the queen is, the young man explains that the queen is in his hand (his fist). Some folks on Reddit were wondering why the young man is moving his bees in this manner and some beekeepers explained what was going on. Apparently, bees swarm when they have a new queen. A portion of the hive breaks off from their old hive to start a new hive. The swarm looks scary, but it’s actually the most docile bees will ever be because they’re looking for a new home while at the same time protecting their queen.

Guy transports a bees colony by carrying the queen is his fist; the rest of the bees crowd around where their queen is 🐝🤯
⠀
by daniirodman (TikTok) pic.twitter.com/euDdYlL9h8

In the case of what this young man is doing, the queen doesn’t feel threatened, nor is she being harmed, so the swam just kind of follows along. But how do the bees know that the queen is inside the man’s fist and isn’t in danger? The answer to that is pheromones. The bees can smell the queen through his fist and she would give off a scent to indicate danger if she felt threatened. 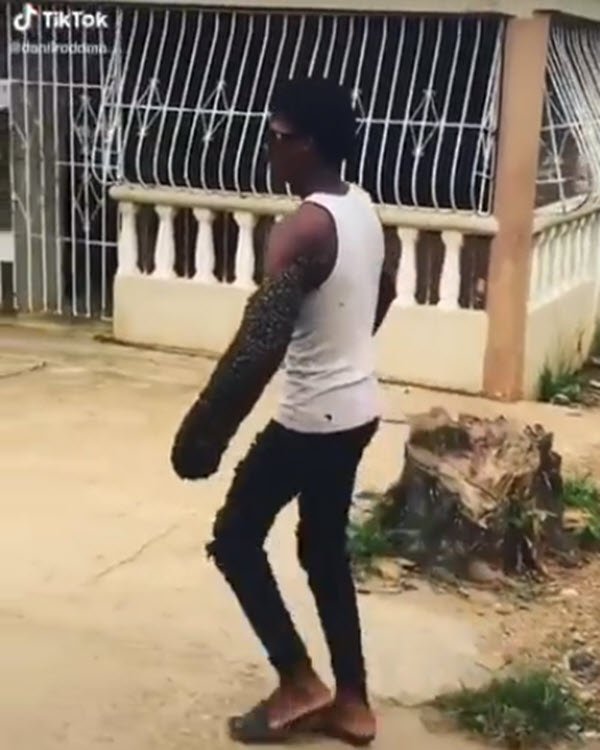 Research has shown that with honeybees, communicating with pheromones is one of the most advanced communications done by social insects. This is remarkable. Watch the video below.

Guy transports a bees colony by carrying the queen is his fist; the rest of the bees crowd around where their queen is. from nextfuckinglevel