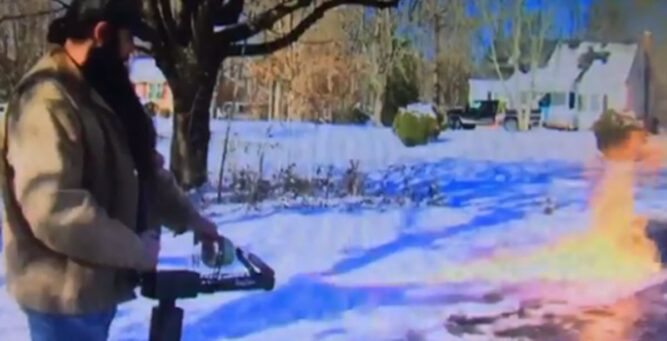 I live in Texas and have lived my whole life in the South, so I’ve never had to experience a lot of snow and ice, at least not the sort that needs to be shoveled or melted away. About once a year, we get a tiny bit of snow and every couple of years, we get enough ice on the roads to shut down schools. However, it’s a “snow day” and not a way of life for us, blessedly. If you live in an area further north, you’ll probably appreciate some interesting tips on how to get rid of the snow, particularly if you hate shoveling the beautiful white stuff.

A few years ago, an Amherst, Virginia man named Nathanael Caplinger offered up his best advice on getting snow off of the driveway: use a flamethrower. Caplinger revealed to WSET that he hates shoveling snow, so when he read an advertisement for a blowtorch, he decided to give it a go. The advertisement specifically mentioned clearing snow, so why not, right? Like a responsible citizen, Caplinger checked with his local officials and researched state and local laws before he got outside and started having some fun with his new blowtorch. Since the East Coast is expecting some nasty weather, this story started trending once again.

Although the device worked beautifully for Caplinger, he emphasized that it’s important to use this device very carefully and safely. For one thing, you have to make sure there are no flammables nearby. That seems like a no-brainer, but if you’ve got a can of gas for your lawnmower in your carport, you might want to put that somewhere else. One thing to understand is that it’s going to burn anything it touches, so be aware of that and remove all other objects from the area.

Fired up about snow removal. pic.twitter.com/fOrhVohCvE

Also, officials suggest that before using your device, be sure to contact local officials before you do. Watch this crazy video below of another man’s ingenuity.