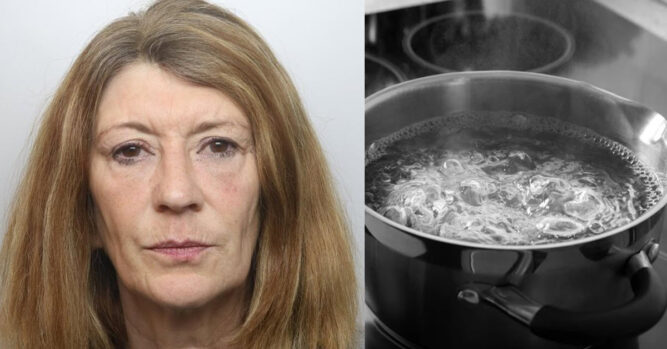 I think most of us probably imagine what we would do if we were in a very difficult situation. Although there are many issues that we could face, one difficult issue is if we found out that our children were being sexually abused.

For most of us, finding out something as shocking as that would put us into a rage. We might be numb at first but eventually, we would be looking for some justice.

It seems as if a woman also felt the same way after she learned that her children were sexually abused. She had been married for 38 years and it came to light that her husband had abused the kids when they were children.

Woman found guilty of murder after pouring a mixture of boiling water and sugar on her husband while he was asleep.https://t.co/i7CeAxd3OZ

It was revealed to her by her daughter after she said that her 80-year-old husband had prayed on her and her brother when they were young. The mother couldn’t stand the frustration of learning such a difficult thing.

In a rage, she grabbed a bucket and boiled two kettles of water. She then mixed in three bags of sugar and went into her husband who was sleeping and threw the boiling sugar water on him.

The 54 nine-year-old mother had seriously injured the 80-year-old man. She then ran from the house to her neighbors and told them that she had hurt him really bad and had even killed him.

This is Corinna Smith from Neston on the Wirral who has been sentenced to life imprisonment for murdering her husband by pouring boiling water, laced with sugar, over him while he slept at his home after hearing rumours circulating about him which she believed to be true pic.twitter.com/LSTCG4Vsuy

The police arrived to find the man in pain. He said that he had been burnt all over and he was lying in bed with skin peeling off of his body. He told them she had poured water on him and he wanted to die.

It took a month for him to die but eventually, he died as a result of his injuries. The wife told the police that she accepted guilt for pouring sugar water over him and said that it was a bit of a blur. She ‘lost it’ and was acting out of emotion, not out of revenge.

Since there was sugar in the water, it stuck to his skin and made matters even worse. She also took the time to go nine doors away to tell a friend what she had done rather than getting help.

During the time that it was in court, the judge said that she was understandably very upset. That being said, she was found guilty and put in jail for life with a minimum of 12 years.