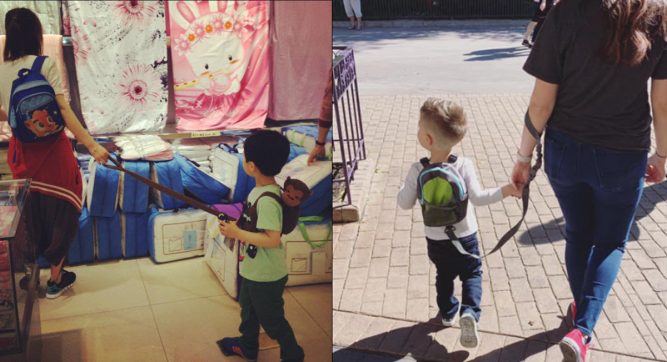 We live during a time when parents are more distracted than ever before, whether it’s by more human activity or by the shiny smartphone in their hands. This also means that it’s harder for parents to keep an eye on their little ones while out and about. We’ve heard so many stories about parents picking up their phones to answer a text or call, and once they look up, their child is nowhere in sight. Any parent who’s raised a small child knows that they can disappear in the blink of an eye if you’re not careful. There are some parents who don’t agree with one method parents use to keep track of their children. However, one mom explained in a letter why it was important for her to make her adoptive son wear a leash backpack.

Even as I start to write this now, I’m crying and clouded in shame and embarrassment. I know I shouldn’t feel this way but as I said, today was hard.

Our family and friends know our son is adopted, they also know he was born drug addicted. He has more energy and speed than your average 21 month old. Aside from his already rough beginning of drug exposure, we know little to nothing about his bio family and their genetics. So he could be more hyper just from experiences that I don’t know of.

All of that being said, the “Karen’s” and “Susan’s” of the world don’t know that about my child or my ability to parent him.

I have a backpack leash for my son.

He’s so cute! #toddler #walkingonthebeach #backpackleash lol #toddlerleash he only wore it on the beach lol I don’t trust him hahahahaha

some parents have taken a step to protect their children that not everyone agrees with. One mom wrote a letter explaining just why she decided to put a backpack leash on her child.

10 years ago, walking around Disney World, I laughed and cringed at the sight of children on leashes. “How can they not control their child?, I’ll never let my child behave that way”

Yes, I was “Karen” then, but, lets be real, every parent has said that line once or twice BEFORE they had children and ate crow years later.

My child runs faster than me. Due to scar tissue from my hysterectomy, I do have trouble running sometimes to keep up with him. Let it also be known, I religiously ran races and ran everyday before my surgery. So it’s not a lack of laziness.

My child also hates to be confined, whether it’s a car seat, high chair, stroller or shocker, a shopping cart. I use Shipt more often than I should because it is incredibly hard to go out with him alone sometimes. But, guess what, life doesn’t always work that way and we have to go out and get things done.

I have come home crying because I have left stores before finishing shopping because he is having a meltdown, I also got the snide comments and nasty looks then too.

But today, today was worse. We went to Target and we wore his backpack and he did AMAZING. He was HAPPY, LAUGHING, SMILING, and yes, running, but he was close to me.

The looks and side eye I got from no less than 5 “Karen’s” made me grab my two items and leave.

I don’t know why women feel the need to judge and mom shame so often. What works for your child doesn’t necessarily work for mine. I’m glad your little Lucy is perfect and never has meltdowns.

My child isn’t talking yet and we have a communication barrier. He attends occupational and speech therapy and he is THRIVING. He is such a happy, beautiful little boy with A LOT of energy.

I’m not writing this for pity or sympathy, but more of a public service announcement to kids with leashes. My son does not have a disability, he is a runner. My neighbors know he is a runner, so much so that they chase after him too.

It takes a village to raise a kid and my village rocks.

Something I have realized over the years is that when I bottle up my feelings, they eat at me. Sharing my story has in…

Also here’s a video debating the use of leash backpacks.