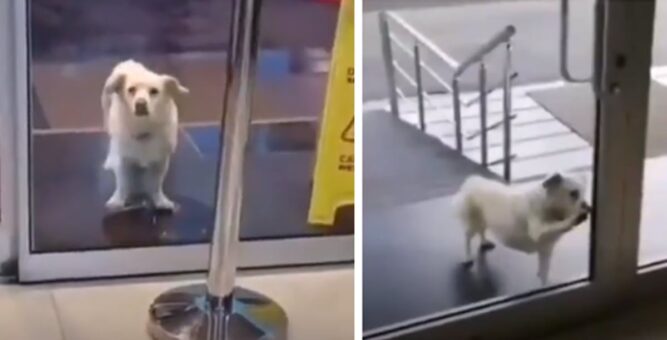 A lot of people are spending more time in hospitals for the last year or so, and some heartwarming and sometimes heartbreaking stories are popping up about family and friends going the extra mile to try to let their loved ones who are hospitalized know that they’re loved. Because of the restrictions, people can’t always visit their loved ones who are in the hospital and it’s taking a toll both on those who are ill and those who are eagerly awaiting their return home. We’ve seen stories of spouses singing outside windows and even a bride who got married in a nursing home courtyard so her mother could watch from a distance.

However, it’s not just humans who are feeling the pain of separation from sick family members. Our pets are also feeling the pain, and for them, it’s harder to understand. They don’t know what’s going on in the world and all they know is that they’re concerned and in many cases, scared. A dog named Boncuk knows exactly what I’m talking about. This loyal dog has been waiting outside the Medical Park Trabzon Karadeniz Hospital in Turkey every day from 9:00 a.m. until evening. See, he knows that his owner (Dad) is inside and he just doesn’t understand why he doesn’t come out.

Every morning, Boncuk shows up and just waits, staring through the sliding glass doors. He knew exactly where his dad was taken because an ambulance came to pick the man up. Boncuk followed the ambulance to the hospital, where Boncuk’s dad Cemal Şentürk is being treated. The man’s relatives took the dog home with them, but Boncuk refuses to stay at home. Şentürk’s daughter explained that even if they take the dog home, he goes right back to the hospital to wait for dad. He doesn’t bother anyone. He just sits there, heartbreakingly, waiting patiently.

The dog’s loyalty has warmed the hearts of the hospital staff and they make special trips outside to cheer Boncuk up and take him food. When the dog finally got to see his dad once again, he started wagging his tail furiously and smiling for the first time in several days. The man explained that he’s had Boncuk in his family for nine years and he misses his dog as much as his dog misses him. Fortunately, the man was finally able to go home on Wednesday, The Independent reports. Watch the heartwarming video below.