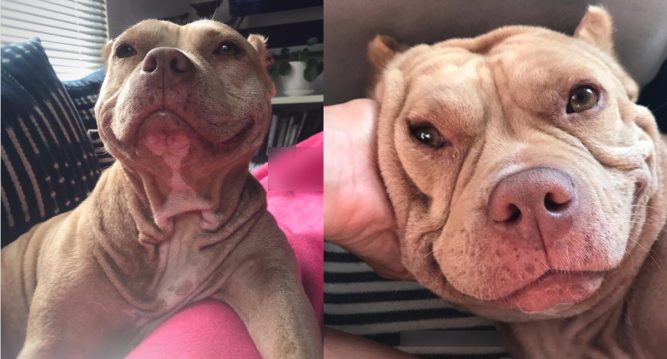 For all dogs, life on the street is not a good thing. The streets are filled with dangers such as cars, other dogs, and cruel humans. Plus, there’s the matter of finding food, water, and shelter during hot summers and cold winters. And while many dogs have trouble getting adopted after they are taken in by shelters, for Pitbulls, the obstacles they face both in the streets and in shelters are nearly insurmountable. People are afraid of this breed and assume any stray pitbull is dangerous. This has lead to many dogs being killed in the street or when they wander into someone’s yard.

However, a sweet pitbull named Shortcake had gotten very lucky. She was originally discovered wandering the streets of Fresno, California. When she was found, Shortcake had mange, and her skin was in horrible condition as it smelled as if it were rotting. Shortcake also had a painful hernia. But, despite all her health issues, this sweet furbaby had a lovely smile, which she freely used to thank the kind rescuers who saved her. Shortcake was taken in by a local shelter before she left that shelter and taken in by Fresno Bully Rescue, who found the pup a loving foster home.

During her time at these shelters, Shortcake’s hernia and manage were treated, and she was now a perfectly healthy and happy girl.

And if you thought Shortcake had a gorgeous smile before, you should see her lovely doggy grin now.

Shortcake now enjoys her playing with her other foster siblings until she’s totally tuckered out, and then she enjoys nice long doggy naps. This lucky pup just can’t stop grinning from ear to ear, thinking about her incredible new life! And who can blame her?

According to her mom, Shortcake even grins while she sleeps, and she also makes the funniest and cutest sounds that endeared her into the hearts of her new family even more.

Today, Shortcake is around four years old, and the happy pup continues making new friends online with over 130,000 Instagram followers and counting. Shortcake’s mom hopes to adopt another dog so Shortcake can have a permeant playmate to stick around and keep Shortcake company.

My #MondayMotivation to stay home

You can watch an adorable video about Shortcake below.