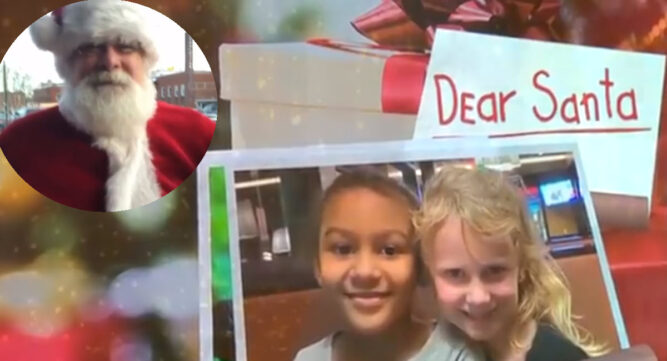 This Christmas, while many children are asking for the newest and most expensive toys, one little girl had a heartwarming request that melted Santa’s heart. Little 7-year-old Annalisse Hocking, who lives in Farmington, New Hampshire, had an exceptional Christmas request in mind when she wrote her letter to Santa this year. Thankfully, Lesley, Annalisse’s mom, saw the letter, and as one of Santa’s millions of helpers, was able to help get the ball rolling.

Annalisse’s gift request didn’t require boxes or fancy wrapping paper. Instead, the child wished to reconnect with her best friend. The entire heartwarming process started when Lesley shared a picture of her daughter’s handwritten letter as well as her own plea on the Farmington NH Community Forum Facebook page.

You see, eight-year-old Nyla played a vital role in Annalisse’s life. That year, she helped welcome the child to her new school, and they quickly became best friends, reports CBS This Morning.

This is one of my favorite stories in a while: Annalisse Hocking was missing a friend who moved away, and wrote Santa for help. Santa and elves on Facebook helped find her in 90 mins, yielding a surprise reunion & early Christmas present.@FostersDailyDemhttps://t.co/jLnsxVDFNv

Just after Nyla moved away and began attending a new school, both children began remote learning.

And like millions of kids, the lack of in-person relationships was very hard on them.

Miraculously, less than two hours after her post went up, Nyla’s mom, Sarah Hodgdon, learned about it and reached out to Lesley.

In an interview after the emotional surprise meet-up, Annalisse was asked if she had anything to say to Santa.

Today, the girls use video chat daily, and they write each other letters and send artwork through traditional mail.

For both moms, their daughters’ reconnection has been both a relief and joy.

You can also watch a video about Annalisse’s charming story below.