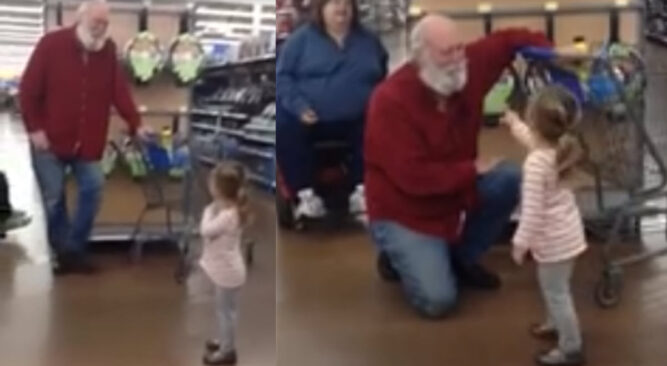 If there’s a common dream shared by most children around the world, its the dream of someday having a chance to meet Santa Claus face to face, and when it comes to small children, it doesn’t make a difference if it’s a Santa lookalike at bank or if they are fighting sleep with all their might on Christmas eve with hopes of catching Kris Kringle squeezing that red suit down their chimney, it’s easy to see the excitement in their eyes whenever they start talking about the big guy. Not too long ago in Hurricane, West Virginia, a little girl in Walmart shopping with her family when stumbled upon the prize of all Christmas prizes. Sophie Jo Riley, whose three-years-old, saw a pretty tall gentleman with a white beard (in fact, white as snow), with a rather large belly (that may or may not have shaken like jelly), and to top it all off, he was wearing a red sweater.

Case closed, I mean what more evidence would any rational person need, right? Sophie just knew that she had seen jolly old Saint Nick in the flesh! Her older sister said that the little girl was trying to be really quiet as she snuck around Walmart, keeping an eye on “Santa.” As her family followed closely behind, she would turn to them and say, “Shh! It’s Santa!” Her dad finally decided to encourage his daughter to go up and introduce herself to the man. And so, with his approval, Sophie timidly went up to the man and innocently said, “Santa?” It’s not hard to imagine how fast Sophie’s heart must have been beating or how nervous her family was at the moment the little girl went up and spoke to the stranger. 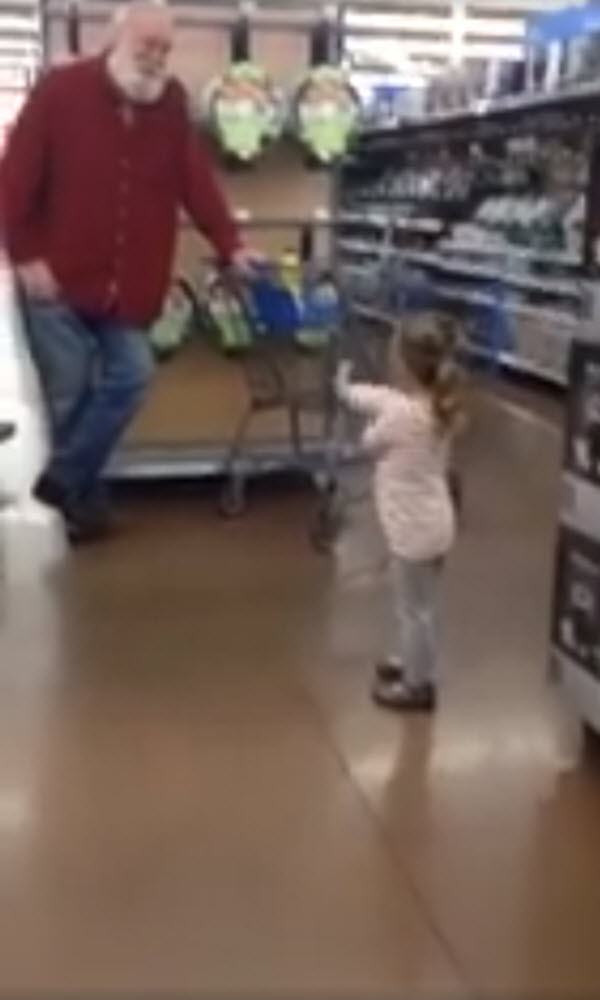 Fortunately, “Santa” or Roger Larck, was a very tender-hearted guy who more than happy to play along if that meant providing a cute little angel like Sophie a Christmas memory that she will cherish forever. And so, the two began a heartwarming exchange, with Sophie showing Santa her pretty nails. She even informed him that her household always made sure to have cookies ready whenever he felt like dropping in. However, when Santa asked if she made all those cookies just for him, Sophie made everyone laugh when she said, of course not! She said that the other cookies were the reindeer. Now, how sweet is that, folks? 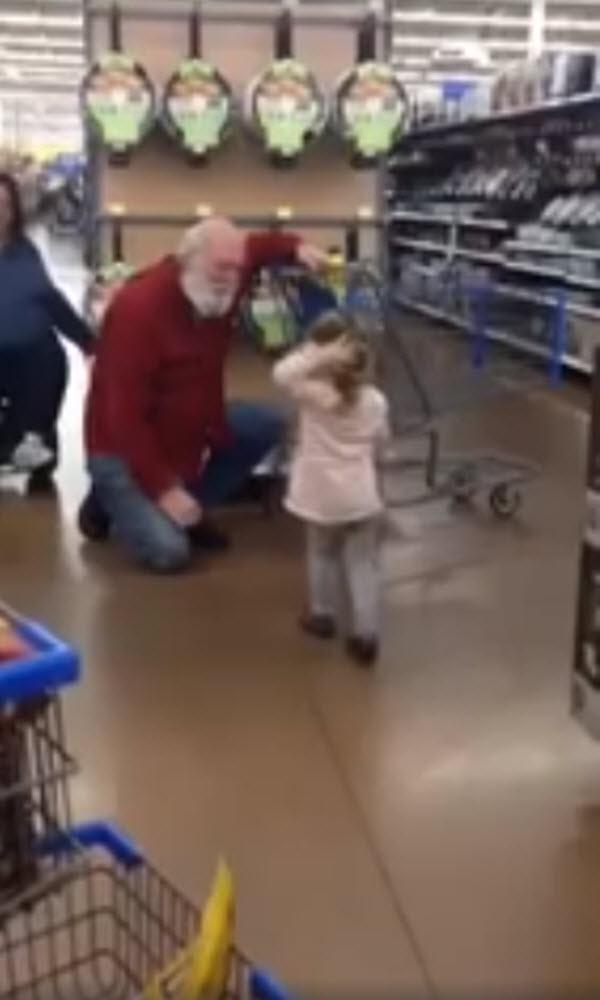 Her also sister was also there to record the cute exchange, which she later uploaded to Facebook. And since it’s gone up, the video has gotten over 1 million views and almost 15,000 shares. Erika Riley, Sophie’s mother, said that the touching moment really reminded everyone what Christmas was all about.

“If there really was a Santa Claus, and now I question it… I think maybe there really is. That’s exactly how I picture him to be.” 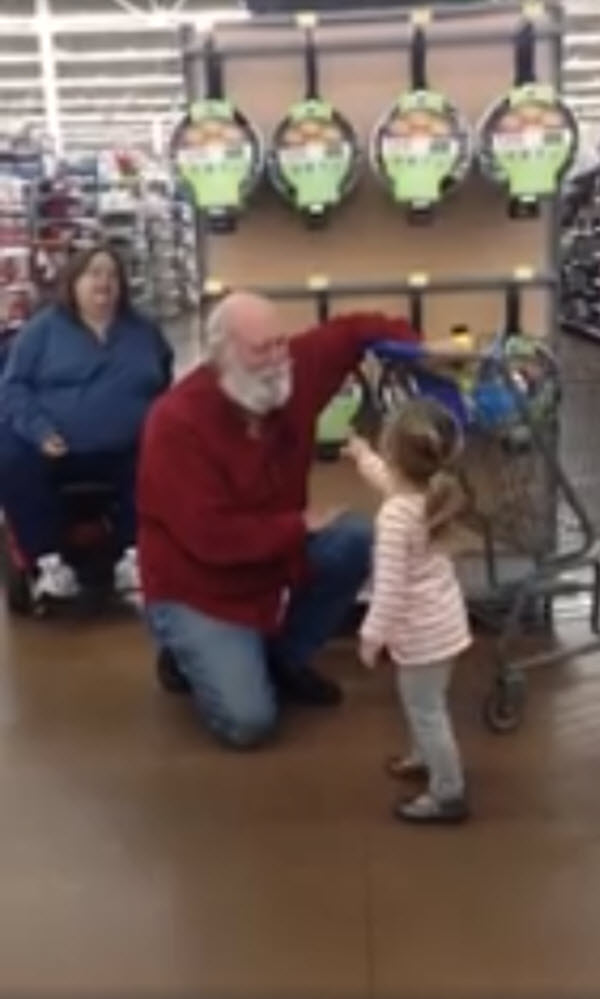 Larck was interviewed by a few news stations and asked about his now-famous meeting with Sophie. He said that he was positively delighted to have had a chance to make a little girl’s dream come true.

“I’m tickled I’ve been a part of something that other people have enjoyed,” Larck tells WSAZ, “It was just me having a conversation with a little girl. It melted my heart when it happened.” 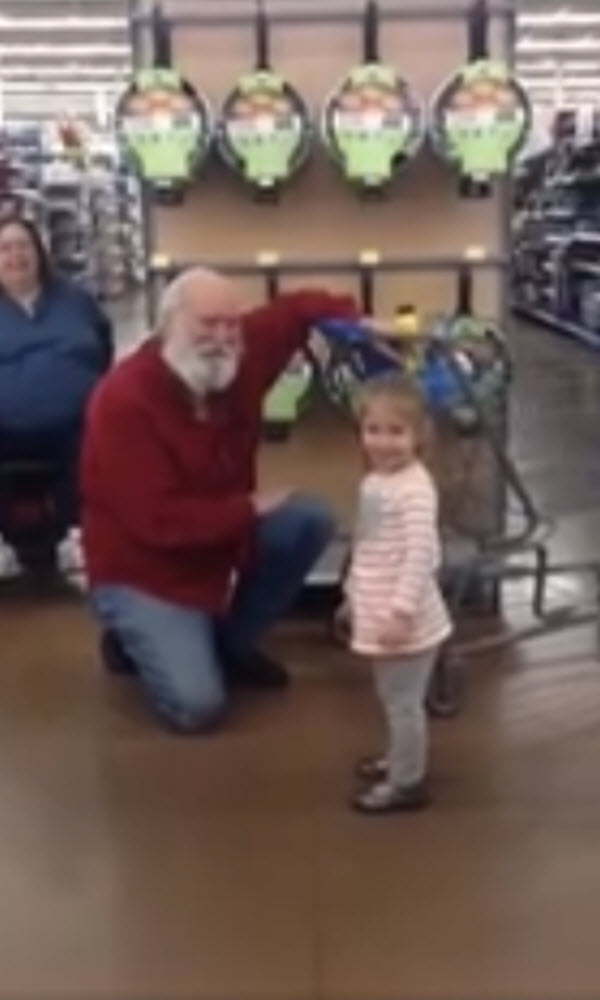 After seeing how this darling of a man was so thoughtful and kind to spend a few minutes with a sweet little girl so that she could experience something so precious, just makes our hearts swell with joy.

You can see Roger and Sophie’s heartwarming meeting in the video below.

Source: Do You Remember