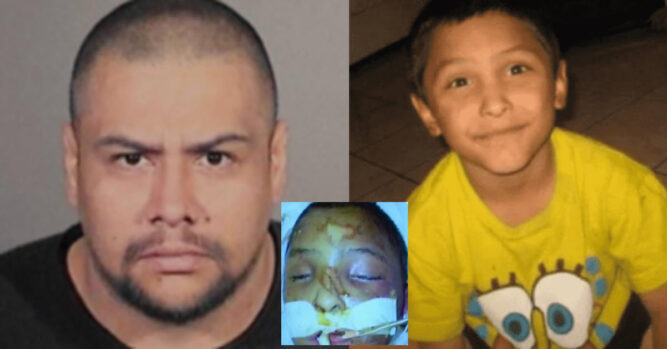 Gabriel Fernandez was only 8-years-old, but he endured more pain and terror throughout his short life than most experience in a lifetime. And that tormented life came to a brutal end in 2013 after his mom and boyfriend beat him. The Mirror reports, Pearl Fernandez, his mom, and her boyfriend, Isauro Aguirre, are said to have tied the child up, gagged him, and forced Gabriel to eat cat litter. They also locked the child in a cabinet they called “The Box” on several occasions because they believed he was gay. After the child’s painful death, Netflix released a new documentary series called “The Trials of Gabriel Fernandez,” which explores the cases in hopes of raising awareness about Gabriel’s heartbreaking story.

An interview with Gabriel’s former teacher broke everyone’s heart after revealing some shocking revelations about what she learned. A couple of days after his death, Jennifer Garcia found a shaky handwritten note from Gabriel to himself.

“I love you mom and Gabriel is a good boy,” it read.

The heartbroken teacher talked about the note which she provided as evidence at Aguirre’s trial. She also said that Gabriel confided in her and asked several alarming questions. For instance, a few weeks after joining her class, Gabriel asked her, “Is it normal for moms to hit their kids?”

Gabriel Fernandez's murderer may never be executed as California launches a moratorium on death penaltyhttps://t.co/93qHlN43fJ pic.twitter.com/NAfaF3wQkz

When she tried to get Gabriel to provide more information, he asked if it was normal to be beaten with a belt buckle. But his last question sent a cold chill down the teacher’s spine.

“Is it normal for you to bleed?” the boy asked.

Immediately, Garcia contacted the Los Angeles County child abuse hotline and reported the suspected physical abuse. However, despite the agency assigning a caseworker, the abuse continued. Caseworkers paid visits to the family’s home several times but claimed to have never found enough evidence to warrant removing the child from home.

Completely wrecked, Watching the @netflix doc on sweet innocent baby #GabrielFernandez
Please, please, fight hard if you see or know a child is being abused. You could be saving a life. #ProtectOurChildren

Sadly, Gabriel’s injuries only accumulated and got worse as he would often arrive at school with bloodied scabs on his scalp as well as bruises from BB gun pellets. The last day of this child’s painful existence on earth was on May 22, 2013, when his mom dialed 911 and told them that her son had stopped breathing after he slipped and hit his head.

Fuck these social workers. Fuck that teacher. Fuck all these people he told his story to & who blatantly fucking ignored his outcries for help. HE SHOULD BE HERE. He should’ve been helped! Rest peacefully sweet boy. I’m so sorry everyone failed you #GabrielFernandez pic.twitter.com/osTn4MZTPW

But when paramedics arrived, they found Gabriel, who had suffered a crack skull, broken ribs, and pellets from a BB gun still lodged in his skin. While they rushed the little boy to the hospital as quickly as possible, doctors declared that Gabriel was brain dead, and he died two days later. Afterward, it was discovered that his mom and boyfriend forced him to take cold baths as they pepper-sprayed him. These demonic “guardians” even knocked the child’s teeth out with a baseball bat.

Jail is not enough punishment for this woman. I say they make little cuts all over her body and dump her ass in acid repeatedly. #GabrielFernandez pic.twitter.com/TndIe18LfY

After confessing to first-degree murder, Gabriel’s biological mother was sentenced to spend the rest of her natural life in prison without the remote possibility of parole, and a jury found her boyfriend guilty of first-degree murder with special circumstances related to intentional murder by torture, which earned him the death penalty.

Those of you who are shocked and outraged at the torture and death of #GabrielFernandez should look in the mirror and reflect how you participate, support, and contribute to our culture of toxic masculinity, homophobia, and transphobia. pic.twitter.com/uQKCyPiczI

Gabriel’s brutal death also exposed the broken system that failed to protect him despite plenty of signs that his life was in danger. Now, seven years after his death, Gabriel’s uncle, Chris Contreras, who with his wife, ended up adopting the little boy’s siblings, Virginia and Ezekiel, who were 10 and 12 when their brother was murdered, broke his silence. The siblings are also said to have witnessed Gabriel’s horrific torture.

Mother jailed for life for torturing her son to death with her boyfriend because they thought the boy was gay. Isauro Aguirre the boyfriend has been sentenced to death and the mother Pearl Fernandez will be serving a life sentence. pic.twitter.com/nzENoyyjLj

To this day, the children will not talk about what happened in that house, despite Contreras’s best efforts to get them to open up, reports ABC7.

“Unfortunately, I think this is something that’s gonna affect them the rest of their lives. One way or another,” said Contreras.

As far as Contreras is concerned, the Department of Children and Family Services’ incompetence makes them “almost as bad as” Gabriel’s abusive mother and her boyfriend. Sadly, the court ended up dismissing a case against the workers who the court ruled did not have a legal responsibility to be concerned about the child’s wellbeing. However, Deputy District Attorney Jon Hatami rejected the court’s decision.

He made his mom a Mother’s Day card with a bruised face, two weeks before being murdered by her, writing how much he loved her.
Only to sleep locked in a cupboard at night with handcuffs on his feet, socks shoved in his mouth, and a handkerchief over his face💔#gabrielfernandez pic.twitter.com/tPjuSQl6Ag

In 2019, California placed a moratorium on executions, which means that it’s likely Aguirre will spend the rest of his life in prison despite his death sentence, reports Mirror.

While California Governor Gavin Newsome said that his executive order was based on his personal morality, Contreras believes that Gabriel’s murder doesn’t deserve mercy.

“I would show everybody that picture of Gabriel in the hospital. Because no matter how many times I saw Gabriel smile, when I think of Gabriel now, I picture him in that hospital bed, not waking up,” he said.

Thanks to @GavinNewsom and his moratorium on executions – Monster child torturer-killer Isauro Aguirre remains on death row but the stay of execution grants a temporary reprieve.

Los Angeles & California need to get their priorities straight.#TheTrialOfGabrielFernandez pic.twitter.com/i5wesc3b9T

We need to do more to prevent tragedies such as this; there was simply no reason this little boy shouldn’t be alive today and living a new life with a loving family. For more on this heartbreaking story, you can watch the video below.