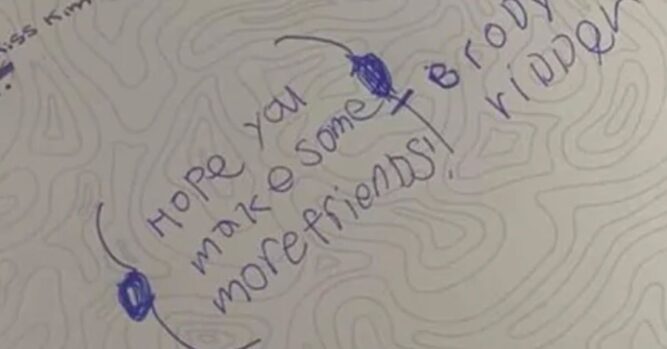 When most of us look back on our school years, we have something in common. It’s the fact that, unfortunately, many of us were bullied during that time.

In some cases, it may have been a temporary issue that came and went but there are many children who are bullied relentlessly during their younger years. It can really have an effect that lasts for a lifetime.

Something similar happened to the sixth-grade student in the following story. It seems as if nobody in his class was signing his yearbook and it really broke his heart. When he showed the yearbook to his mother, he only had his teacher’s signatures and a student or two. 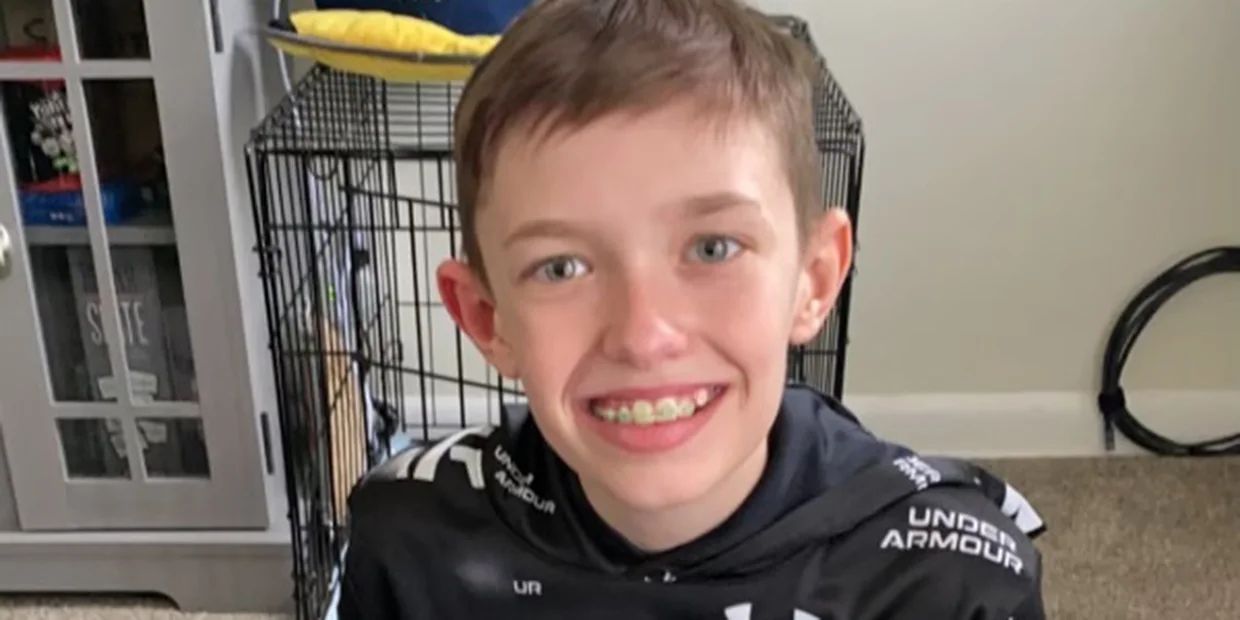 12-year-old Brody Ridder is described by his mother, Cassandra as being a smart, funny, and cheerful child. When she picked him up from school, however, he was quiet and only wanted to listen to music. She knew that something was wrong.

Cassandra also knew that the students would be bringing home yearbooks because she received an email from the school. She asked him about his yearbook and if he got a lot of signatures and that is when he broke down in tears.

“He said that he’d asked the kids in his class if they would sign his yearbook and some flat-out said no,” she said. “A couple of his classmates jotted down their names – but there were no messages. There was nothing about how smart, funny and awesome he is.”

After looking at his yearbook, she saw that only his teachers had signed it, along with a couple of kids. There was also a message that Brody had written to himself: “Hope you make some more friends – Brody Ridder.” 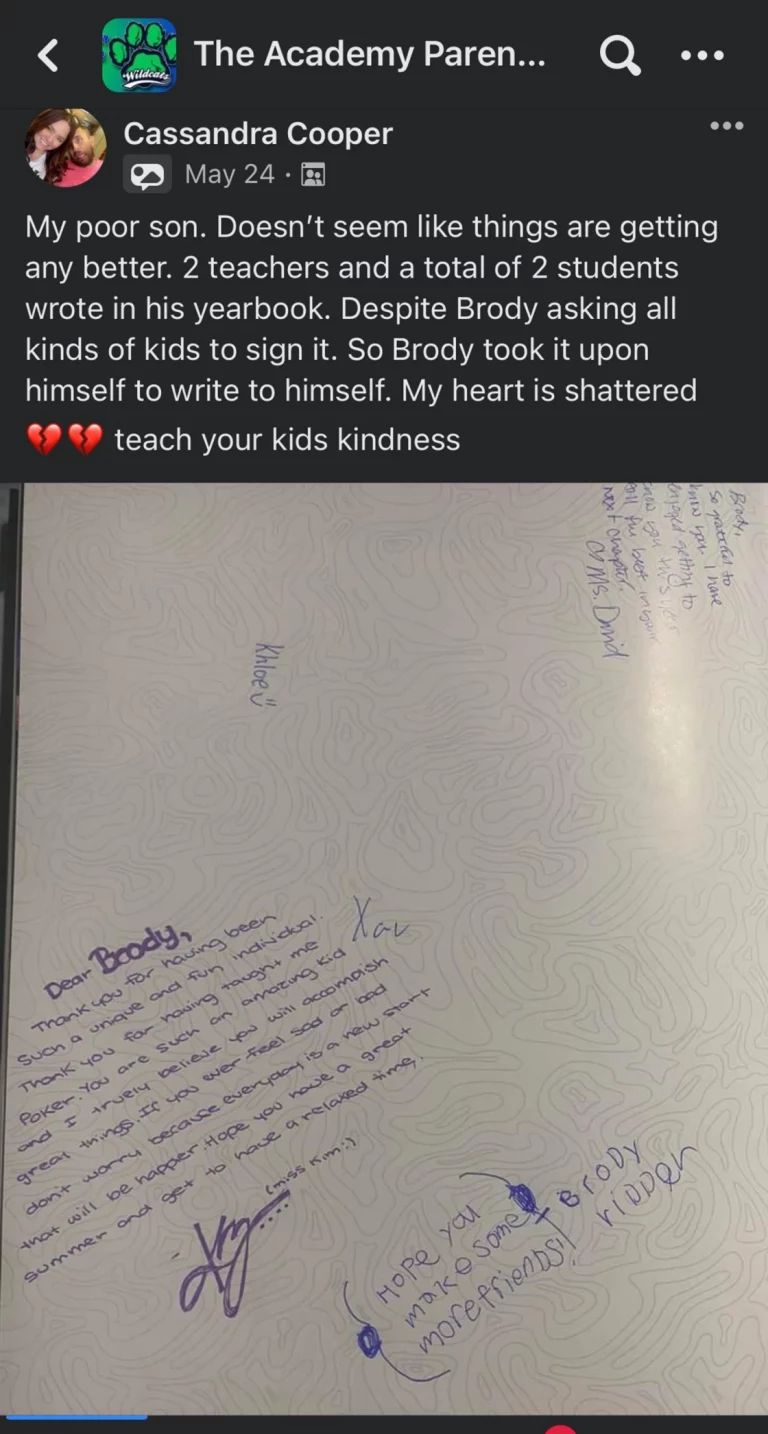 Brody has some rather unique interests and his mother feels that is what keeps him from being friends with other children. He has been bullied for a long time and because of it, he comes home crying almost every day.

When he was in the fifth grade, they switched schools in the hopes that it would help but the teasing continued. They brought it to the administrators at the school but it didn’t help much.

“There’s kids that have pushed him and called him names,” said Cassandra. “Brody has been through a lot.”

That is when she went to the parent’s Facebook page in the hopes that she would get some help. She put a picture of his almost empty yearbook and talked about the situation. She was asking if the other children would be kind.

“My poor son. Doesn’t seem like things are getting any better. 2 teachers and a total of 2 students wrote in his yearbook. Despite Brody asking all kinds of kids to sign it,” she wrote on the Facebook page. “So Brody took it upon himself to write to himself. My heart is shattered. Teach your kids kindness.”

She was happy when she received a message from her son the next day while he was at school. It was a text with a picture of his yearbook that was filled with signatures! Messages were coming from older children as well as those in his class. 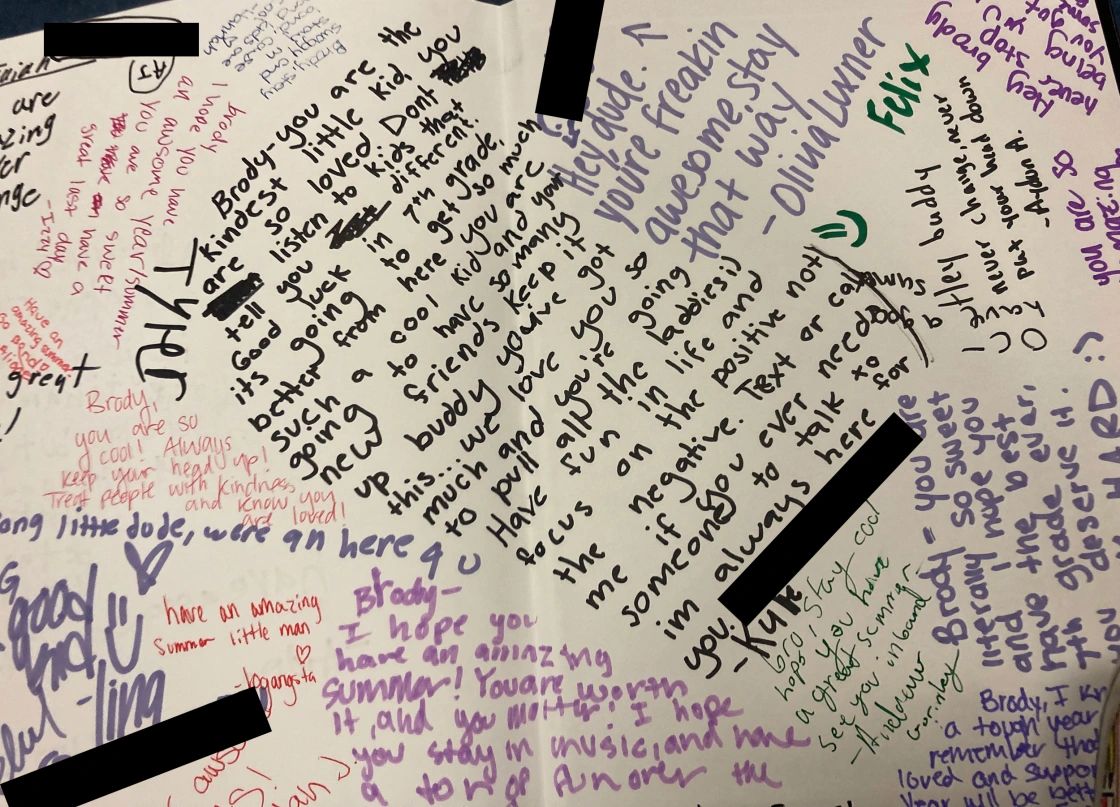 Some of those messages said:

“Hey dude, you’re freaking awesome. Stay that way.”
“Brody – you are the kindest little kid. You are so loved. Don’t listen to the kids that tell you different.”
“Brody – I hope you have an amazing summer! You’re worth it and you matter!”
“Hey buddy, never change, never put your head down.”

He ended up telling his mother that he was having the best day ever and after some older children signed his yearbook, many of those in his own class were excited to do it as well.

Brody is now smiling from ear to ear and he is looking forward to seventh grade, saying that it is a new beginning.