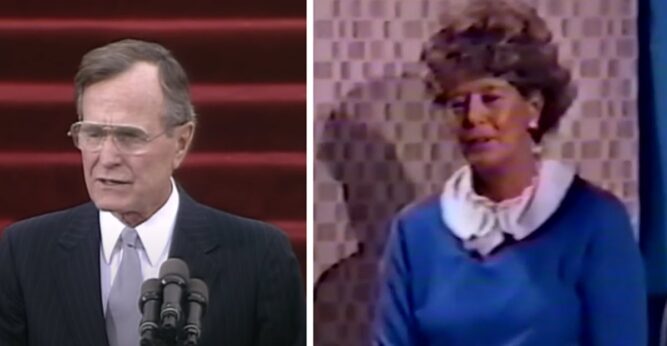 She was the sister and aunt of presidents and governors, but that didn’t protect Nancy Walker Bush Ellis from the deadly coronavirus. Ellis died early this week from complications of the deadly virus. A liberal Democrat, Ellis still helped in the political campaigns of her brother and her nephew. Ellis’s brother was the late Pres. George H.W. Bush and the aunt of Bush’s son, former Pres. George W. Bush. She’s also the aunt of former Florida governor Jeb Bush. At age 94, she had led a full and active life, and a Bush family statement said that she died on Sunday.

The news was shared in a tweet from the George and Barbara Bush Foundation. In the tweet, the foundation said that Ellis had passed away and that the staff and family were grieving her loss. Whoever posted the tweet said that Ellis was a remarkable woman who was known for bringing light and joy to the world and all who knew her. Her great-niece, Jenna Bush Hager, is the daughter of Pres. George W. Bush. On Monday’s Today Show, Hager described her great-aunt and how much the woman had meant to her. Hager said that she “loved her a lot,” and described her as a lovely woman.

We are sad to share that President Bush’s beloved sister, Nancy Bush Ellis, has passed away. Our condolences and prayers are with the Ellis and Bush families as we remember a remarkable woman who brought joy and light to the world.
https://t.co/RnjRVVbBFT

Hager also said that her grandfather, Pres. George H.W. Bush, loved his sister “so much.” The family feels blessed that Ellis lived a long and full life. Another Bush family member tweeted about Ellis. Pierce Bush is Hager’s first cousin and the elder Pres. Bush’s grandson. Pierce Bush said that his “great aunt Nan” had died because of a COVID related illness, and he said the woman was a rare individual, and everyone who knew her was a better person for having known her. Bush added that she was not only smart but also witty and classy.

My great aunt Nan passed away this morning due to covid related illness.

She was an amazing woman, cut from a rare cloth. All who knew her, were better because of it.

Smart, classy and witty- she cared deeply about family and was loved by all. https://t.co/7FzZtrCAu4

Bush ended his tweet by saying that Ellis cared a great deal about her family. The Bush family is known for being a tight-knit family. During her life, Ellis worked diligently on environmental issues, anti-poverty campaigns, and worked closely with the NAACP, Hager said.

Nancy Bush Ellis, a longtime Democrat who helped her Republican brother and nephew get elected president, has died of complications of the coronavirus. She was 94. https://t.co/mRZB4EVjKb pic.twitter.com/25phh8MnOI

Ellis was well-known as the family historian, and a historian named Jon Meacham tweeted about her legacy, saying that if a Bush family history question was ever raised, the senior Pres. Bush always went to his sister.

Remembering the great Nancy Bush Ellis. Whenever a question about family history was raised, Bush 41 would say, “Unleash Nan!” https://t.co/cmLee5PAH3

Ellis was hospitalized on December 30 and tested positive for COVID-19.